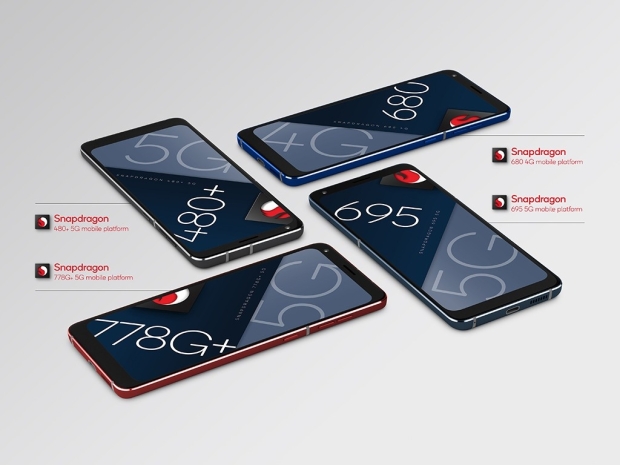 Qualcomm has unveiled four new SoCs, or, to be precise, two new SoCs and two "plus" versions of existing SoCs, the Snapdragon 778G+, Snapdragon 695, Snapdragon 680, and Snapdragon 480+. This can be seen as Qualcomm's push to refresh the existing lineup as well as bring 5G connectivity to mid-range and entry-level markets.

The Snapdragon 778G+ is aimed at premium mid-range smartphones, and as it was the case with the non-Plus version, this one is made on 6nm manufacturing process as well. While the configuration remained the same, CPU part has been pushed a bit higher and it gets the new Adreno 642L GPU.

The Snapdragon Kryo 670 Prime core now runs at 2.5GHz, which is a healthy 100MHz boost, and the GPU promises 20 percent higher performance, at least according to Qualcomm. The rest of the specifications remain unchanged, so you still get Qualcomm's X53 5G modem with 3.7Gbps DL and 1.6Gbps UL, 6th gen Qualcomm AI Engine, Spectra 570L ISP, Hexagon 770 processor, and more.

As this is a "gaming-oriented" SoC, it comes with select Snapdragon Elite Gaming features, as well as features Qualcomm Quick Charge 4+ technology.

A similar thing goes for the Snapdragon 480+ 5G mobile platform. This is also a popular entry-level SoC among smartphone makers as there have been more than 85 devices announced or are currently in development based on this SoC. Bear in mind that this was the first 400-series SoC with a 5G modem so its popularity is not a big surprise.

Surprisingly, Qualcomm decided to keep the new Snapdragon 480+ on 8nm manufacturing technology, and Kryo 460 CPU and Adreno 619 GPU are now pretty old, but that did not stop the company to push frequencies a bit higher, at 2.2GHz for the CPU part.

The new SoCs announcement includes the Snapdragon 695 5G, which is an interesting push compared to the Snapdragon 690. It gets the much-needed 5G support and gives it a decent boost with new Kryo 660 CPU cores and Adreno 619L GPU, which also comes as a switch from 8nm to 6nm manufacturing process.

Things get messy with the Snapdragon 680 SoC, which is based on a 6nm manufacturing process but it does not feature a 5G modem, but rather sticks with 4G. It has an octa-core Kryo 256 CPU design (up to 2.4GHz) and Adreno 610 GPU.

Qualcomm was also keen to announce that some of the makers are already excited about these new SoCs, including HMD Global, Honor, Motorola, OPPO, vivo, and Xiaomi. Xiaomi is looking at the 778G and 695, while HMD Global is excited about the Snapdragon 480+.

Rate this item
(0 votes)
Tagged under
More in this category: « Sony goes for creators with Xperia Pro-I smartphone Apple blames others for tanking results »
back to top