We saw the live demo and we can confirm what our own Nick Farell said here. AMD traditionally has a hotel booked across the street from IDF and tends to steal quite a few journalists and show off its latest and greatest stuff. As you can see, it's a good strategy. 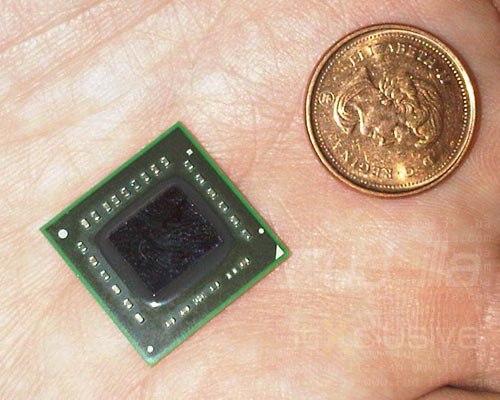 The chip on the picture is very small and it has an 18W TDP. This dual-core chip, codenamed Zacate is very cool as well. It should be able to run without a fan, but the version we saw had a fan on it.

The small silicon is doing just fine against a Core i5 based notebook, based on Intel’s Arrandale core but we are not sure how well it competes against Sandy Bridge. We can also tell you that the chip is two times smaller than Sandy Bridge that we’ve seen and it looks like they should do just fine even against Atoms in the netbook market.

AMD claims it has quite a few design wins, but it cannot talk about them just yet. Oh yes, no one wants to talk about clocks at this time, either.

Brazos Fusion is different from Ontario