Just as we wrote a couple of days ago, AMD has officially announced its first batch of Richland mobile APUs. Richland APUs are the replacement for AMD's Trinity APUs that were a big deal last year. Although they are pretty much based on same CPU and GPU architecture, as well as the same 32nm manufacturing process and even use the same socket, Richland does bring some serious and interesting improvements.

As noted earlier, Richland is still based on Piledriver CPU cores, while the GPU part is still based on the same GPU architecture as the Trinity GPU, despite its new Radeon HD 8000 series model number. On the other hand, the new Richland parts did get higher clock CPU and GPU frequencies, some impressive power management improvements and platform oriented enhancements and features. 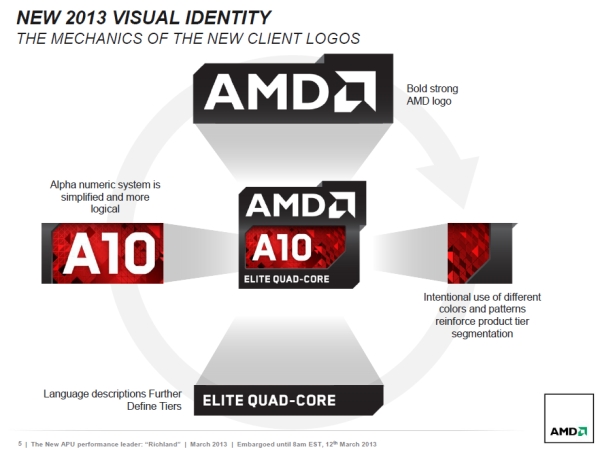 To be precise, AMD has launched only four mobile Richland SKUs today, all with the same 35W TDP. The flagship quad-core A10-5750M is joined by another quad-core A8-5550M and two dual-core APUs, the A6-5350M and the A4-5150M. You can expect slightly higher PCU and GPU clocks while the rest of the specs remain unchanged, at least in the mobile segment. The A10-5750M does get 1866MHz memory support, but still features the same amount of L2 cache and same amount of "Radeon Cores" in its Radeon HD 8650G GPU.

AMD did not focus on talking about performance but rather comparing the actual power consumption of Richland APUs against Trinity counterparts. The numbers do seem impressive as when Richland and Trinity flagship parts (A10-5750M and the A10-4600M) are compared AMD is claiming that Richland is up to 47 percent more efficient than the previous generation in HD playback. While there are noticeable efficiency improvements in both idle and WiFi web browsing scenarios, those are mostly attributed to lower overall consumption of the platform. 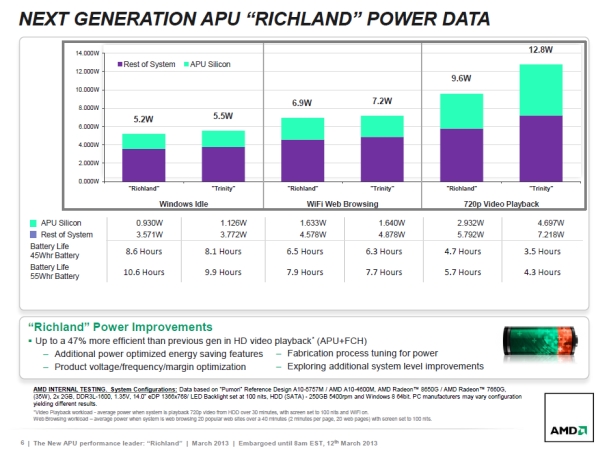 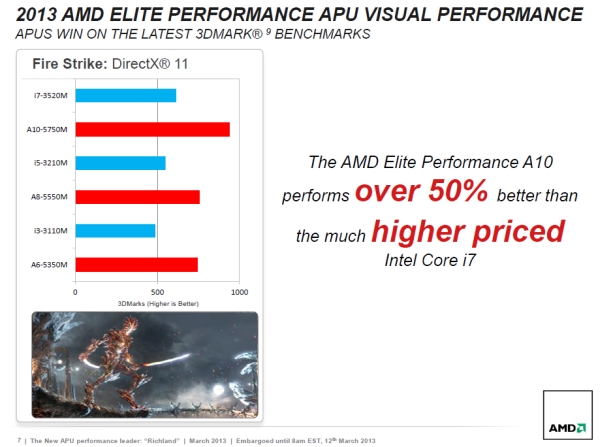 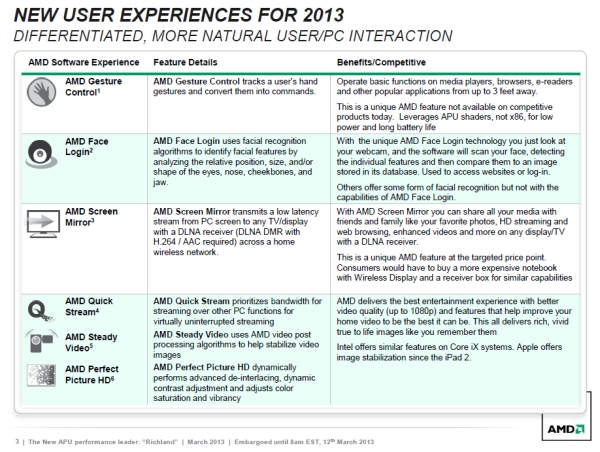 All four new mobile Richland SKUs are already shipping to notebook manufacturers while, according to AMD, mobile 25W and 17W parts, as well as desktop ones, are expected in the first half of the year.

As you already know, Richland will be with us at least until the end of 2013 and should be replaced by Kaveri APU based on the new Steamroller CPU architecture and Sea Islands graphics part.

Last modified on 12 March 2013
Rate this item
(0 votes)
Tagged under
More in this category: « Report claims Tegra 4 will outpace Snapdragon 800 Could Intel land Apple A7 chip order? »
back to top