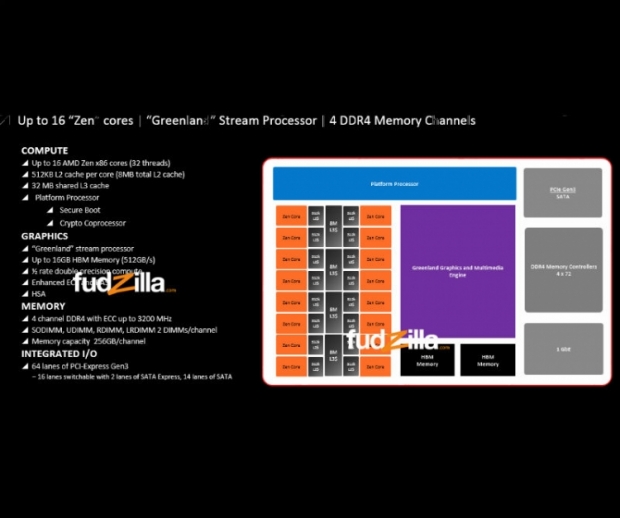 AMD mini cores and modular designs backed by HBM graphics and the upcoming Greenland GPU core might be a winning combination for AMD.

The flagship desktop Zen chip, that still doesn’t have a codename we can mention, should be coming in 2016 in 14nm GlobalFoundries' high performance manufacturing process. This is a successor to the Richland / Carrizo APUs and the highest end part is aiming to give the seventh generation Intel Core i7 (Cannonlake 10nm) run for its money.

At this point it is obviously too early to announce any winners, it will come down to how efficient AMD's 14nm APU is versus next generation Core i7 parts. The instructions per clock will be a relevant factor in this equation, but if AMD comes close to Intel's performance, it will be a huge heap forward for the company.

There is no doubt that Greenland graphics will end up better than Intel Iris graphics that will be the part of Skylake 14nm desktop parts, and most likely the Cannonlake 10nm Core variants expected in 2016.

AMD's Zen based APU will be available in more than just the 16-core version, since this is a modular design and a quad-core with 2MB L2 and 8MB L3 is also possible, octa-core with 8x512KB and 2x8MB L3 cache should be in the cards too.

The fact that AMD uses DDR4 will additionally help its cause and it might win back some desktop market share. AMD still has a lot of engineering power that can surprise, and it will all come down to execution.

One can only hope that AMD x86 16-core Zen APU and its derivatives are coming by mid-2016 (let's say Computex 2016) but this is speculation and nothing that we can confirm or deny. In case Zen X86 performs as well as K8 (blast from the past), this might be a big break that many fans were hoping for, as K10 Barcelona / Shanghai were not as great as many hoped for. K10 started the whole downward spiral for AMD CPUs and let's hope that Zen can reverse this trend.

Last modified on 22 April 2015
Rate this item
(41 votes)
Tagged under
More in this category: « TSMC promises 7nm chips in 2017 Qualcomm quarterly profit down 46%, misses forecast »
back to top