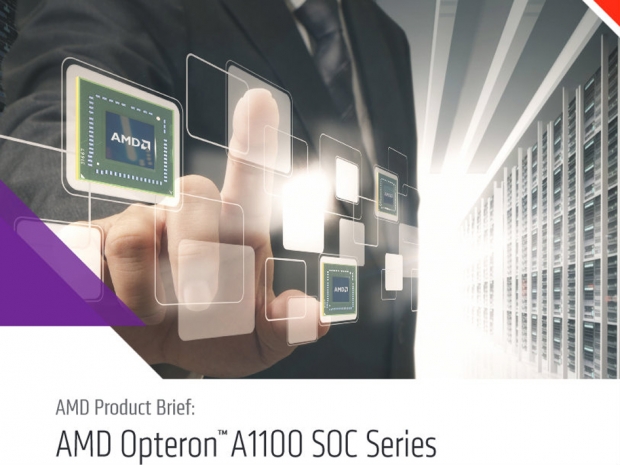 First A57 chip after a year's delay

Miracles apparently can happen after AMD just announced its long delayed Cortex A57 based Opteron A1100 SoC. It took longer than many expected but the Opteron A1100 aka Seattle is finally out.

AMD mentioned the ARM based server project codenamed Seattle in late December 2013 and promised to send demo units to developers in Q1 2014. The company showcased the product in early May 2014 to investors and a selected elite to play with.

At the  time, AMD said that it will ship to customers in first half of 2015 but it looks like a year later the Opteron A1100 Cortex A57 will start shipping in Q1 2016. Not as bad as Duke Nukem, but a year is a long time in Chipland.  This seems to be the first ARM server SoC to ship commercially. Calxeda a world's loudest ARM server maker was bankrupted in late 2013 and HP still managed to ship some servers based on Calxeda procesors in late 2014. But AMD had not abandoned Seattle as many thought. AMD's CFO still beleives that ARM based server market might increase to 15 percent by 2019 and AMD wants a slice of that cake even if the chocolate frosting has gone past its best before date. .

Qualcomm announced its SDP Server Development Platform in October 2015 and it appears things are moving at slightly more than the usual glacial pace in the Arm server world.  The SDP was  demonstrated late last year.  and that will  use up to 24 custom cores made in house by Qualcomm. Meanwhile they will also using ARM instruction set and make vague rude guestures at Intel's  X86. Qualcomm's SDP will use FinFET probably using 14nm while AMD is still focused on 28nm.

The AMD Opteron A1100 Series SoC is the first 64-bit ARM Cortex-A57-based platform from AMD. This is probably why it took such a long time to get things done.

AMD Opteron A1100 SoC has up to eight ARM Cortex A57 cores with 4MB of shared L2 followed by 8MB of shared L3 cache. It supports  two DDR3/DDR4 channels and up to 1866 MHz memory with ECC. The SoC supports two 10 Gb Ethernet network connectivity, 8-lane PCI-Express Gen 3 as well as 14 SATA-3 ports.

“The ecosystem for ARM in the data center is approaching an inflection point and the addition of AMD’s high-performance processor is another strong step forward for customers looking for a data center-class ARM solution. The macro trend of convergence between networking, storage and servers is an important catalyst in this evolution. Customers now have access to 64-bit ARM processors from the only silicon provider that also has decades of experience delivering professional enterprise and embedded products.”

The first customer to ship AMD Opteron A1100 SoC in enterprise-class systems is a company called SoftIron and the system will be known as an Overdrive3000 system for developers. It will be followed by Software Defined Storage solutions from the same vendor.

“The secret of the AMD Opteron A1100 SoC’s appeal is not just the cores, it’s everything around the cores. If you’ve got an application where you need to move large amounts of data around quickly, you’re going to love it.”

Much has changed for AMD in the last few quarters. According to roadmap from Q1 2015 Seattle was planned for 2014, followed by Project Skybridge in 2015 and in 2016  the K12 AMD's custom ARM core. Project Skybridge got canceled and K12 was pushed for later – at earliest at some point in late part of 2017, or 2020 or perhaps never.  It seems when you burn your roadmaps that often you end up lost in a car full of smoke..

Last modified on 14 January 2016
Rate this item
(14 votes)
Tagged under
More in this category: « Mother of Snapdragons choses Samsung AMD is being propped up by consoles »
back to top