New iPhones come with A10 SoC 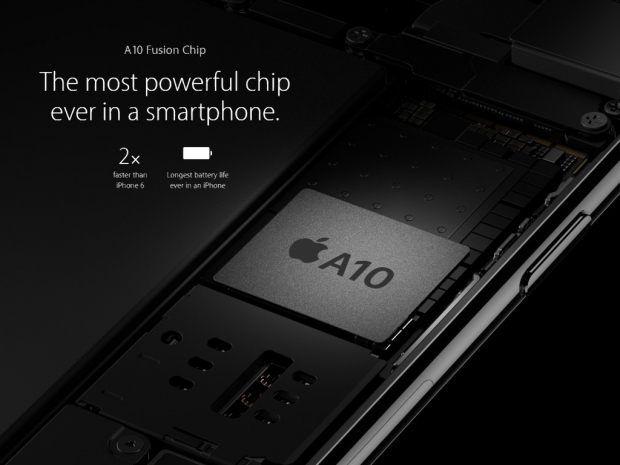 While it did not reveal a lot of precise information, we now know that Apple's  iPhone 7 and iPhone 7 Plus will come with a fancy new quad-core A10 Fusion SoC.

The A10 Fusion SoC is a quad-core chip with 3.3 billion transistors. Unfortunately, Apple was not keen to reveal any more details but it is probably based on the same TSMC 16nm FinFET manufacturing process, just like the Apple A9X SoC as we are sure that it does not want to mix Samsung's 14nm and TSMC's 16nm on the same chip, as it did with the A9 on the iPhone 6S and iPhone 6S Plus.

According to Apple, this will significantly increase the battery life, around 20 to 30 percent compared to the iPhone 6s.

The graphics part of the chip also got a significant boost, offering 50 percent more performance compared to the A9 and up to three times faster than the A8 SoC. The GPU is also more power efficient and uses 2/3 the power of A9 GPU.

The iPhone 7 and iPhone 7 Plus also feature LTE-A with 450Mbps, which suggests that there is probably an Intel modem inside, but we will  have to wait for some teardowns to be sure.

Fine details like the amount of RAM, GPU details and the actual clock of the CPU and GPU part in the A10 SoC, will probably come at a later date.

Last modified on 08 September 2016
Rate this item
(5 votes)
Tagged under
More in this category: « ARM supercomputer delayed TSMC expects to see a 10 percent revenue growth »
back to top