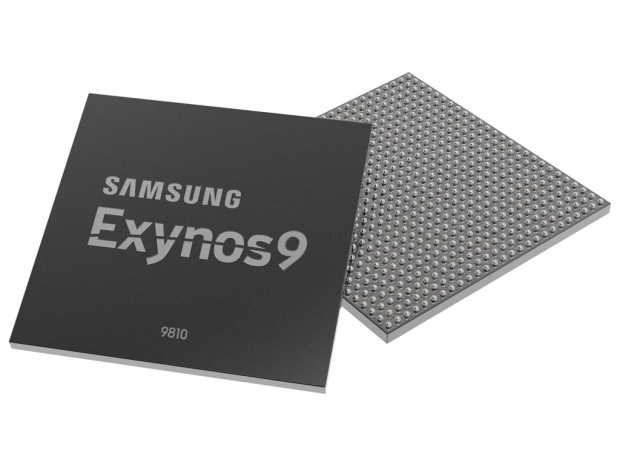 Although it has been both mentioned earlier and seen in earlier Galaxy S9 leaks, Samsung has now officially announced its new Exynos 9810 SoC, promising 2x the performance, dedicated hardware for AI, and more.

As detailed earlier, the Exynos 9810 is made on Samsung's 10nm LPP FinFET manufacturing process, which allowed Samsung to boost performance by around 10 percent or lower power consumption by 15 percent. It features a third generation custom CPU quad-core cluster, known as the Exynos M3, clocked at 2.9GHz, which is paired with a quad-core Cortex-A55 cluster clocked at 1.9GHz.

Although it did not reveal any specific details regarding those cores, it did say these have a wider pipeline and improved cache improvements. All of this gave Samsung a boost of 2x for single-core and a 40 percent boost in multi-core CPU performance. Although we doubt that the two-fold performance is an overall result, it could be possible in some AI-focused applications and scenarios, which could make a bit more sense.

As far as the GPU goes, Samsung used a Mali-G72 GPU, featuring 18 GPU cores and a clock of around 700MHz, at least if Anandtech's figures are right. This gave the Exynos 9810 a graphics performance boost of around 20 percent compared to the last generation.

As expected, Samsung has focused on security as well, introducing neural network-based deep learning and security features that allow it to recognize "people or items in photos for fast image searching or categorization, or through depth sensing, scan a user’s face in 3D for hybrid face detection". According to Samsung, by using both hardware and software, hybrid face detection enables realistic face-tracking filters for face-unlocking and even features a separate security processing unit to safeguard facial, iris and fingerprint information.

The SoC also comes with a new dedicated image processing unit which will handle 120fps 4K video recording and playback, 10-bit HVEC and VP9 support as well as improved camera capabilities with post-processing for low light scenarios and noise reduction.

On the modem side, Exynos 9810 SoC comes with LTE CAT-18 modem with 1.2Gbps download and 200Mbps upload, with 6x carrier aggregation for download, 4x4 MIMO, and 256-QAM. This gives Exynos 9810 an edge over the Qualcomm's Snapdragon 845 SoC and Kirin 970 in terms of modem performance, at least on paper.

According to Samsung, the Exynos 9 Series 9810 SoC is currently in mass production and we will see a bit more about it at the CES 2018 show since it has been selected as a CES 2018 Innovation Awards HONOREE in the Embedded Technologies product category. The Exynos 9810 SoC will probably debut with Samsung's next Galaxy S9 flagship smartphone, which could be announced in the coming months, most likely at a dedicated Unpacked event before or after MWC 2018 show which starts on February 28th.

Last modified on 05 January 2018
Rate this item
(0 votes)
Tagged under
More in this category: « Xilinx has new President and CEO AMD Pinnacle Ridge could launch in March »
back to top