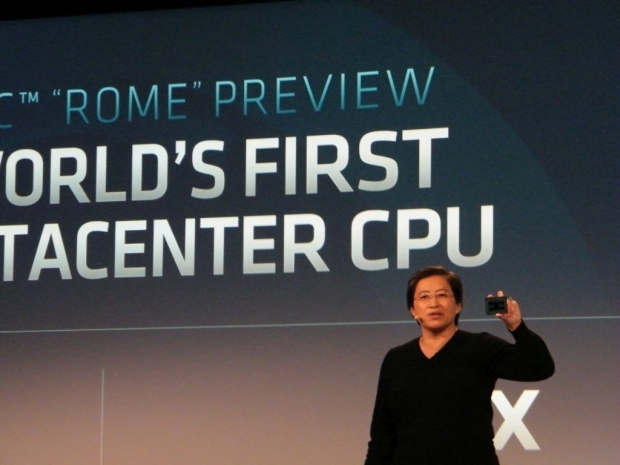 Today is the day when AMD plans to launch its 7nm datacenter CPU with up to 64 cores, codenamed Rome. As AMD gets ready for it’s most important launch ever today, there is a lot of anticipation and excitement for newfound competition with Intel. Still, well-informed sources are confirming that the Rome default voltages are exceeding TSMC’s 7nm maximum voltage.

While the Ryzen 7nm desktop launch has had some success to date, the data center is a very different world where power and performance go more hand in hand then on the desktop. I remember when AMD launched its first EPYC in Austin, Texas, there were a lot of promises about potential growth, and now, more than two years later, AMD managed to have very marginal success in the data center sphere.

The desktop Ryzen at 7nm runs at a very high 1.4V which, according to our well-informed sources, exceeds the TSMC spec at 7nm for 1.3V. AMD doesn't seem to think it's a big deal beyond poor overclockability, which, while disappointing to enthusiasts, is not as big of a deal for many mainstream users and gamers.

1.4V to cause problems in the data center

In the data center, this voltage challenge will have to adjust to much lower levels for stability and efficiency for enterprise customers, which will almost certainly impact performance. While AMD will still perform well in several areas, this will limit the headroom it has in increasing performance and power efficiency in the future. The final voltages will tell us a lot overall.

The datacenter market is a long-term play. Even though a player might have a better product than a competitor in the current generation, data center deployment and platform are set to last for multiple years. So a rushed decision to swap decades of Intel data center Xeon powered farms with an EPYC won’t happen. Partial deployments of the AMD’s new 7nm Rome based processors will certainly happen, but it won't be as massive as AMD will want you to believe.

Now with rumors that EPYC Rome needs higher voltages than TSMC likes, that is going to put Rome in the unfavorable position of being able to burn. We of course are pointing to Nero burning Rome analogy here. Just a short reminder - AMD’s Vega was poisoned with bad thermal powers, something that we’ve heard that troubles AMD’s design for quite some time.

With rumors about Lisa's future outside of AMD and potential new CEO Rick Bergman waiting in the wings, the stakes have never been higher for AMD. Rick who we know from his ATI days, would do a great job, just my two cents.

Update: AMD Public relation department sent us the following statement, but if we were not confident, our multiple sources were right, we would not write it in the first place:

The recent article regarding Rome running at unsafe voltages is incorrect. Our 7nm chips are designed and built to operate normally at boost voltages below the maximum identified by TSMC.