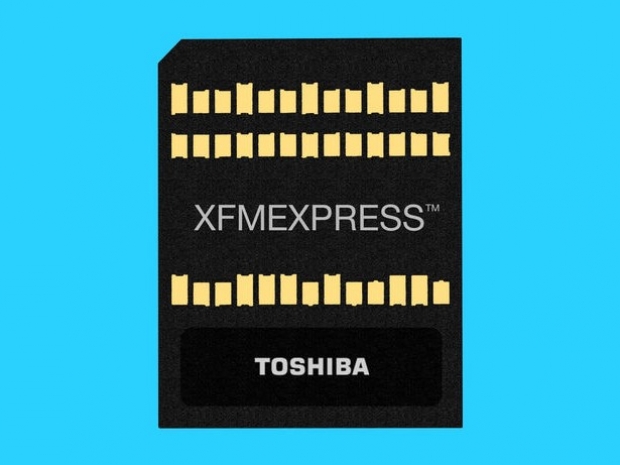 Toshiba has released a new form factor for NVMe SSDs that is small enough to be a removable alternative to soldered-down BGA SSDs.

Dubbed XFMEXPRESS, the form factor allows for two or four PCIe lanes while taking up much less space than even the smallest M.2 22x30mm card size.

The card size is 18x14x1.4mm which makes it slightly larger and thicker than a microSD card ad it mounts into a latching socket that increases the footprint up to 22.2x17.75x2.2mm.

Tosh's idea is to bring the benefits of replaceable storage to devices that would typically be stuck with soldered BGA SSDs or eMMC and UFS modules.

This means aftermarket capacity upgrades in the consumer market for embedded devices that need to be serviceable.

XFMEXPRESS is not intended as an externally-accessible slot like SD cards; swapping out an XFMEXPRESS SSD will require opening up the case of the device, though unlike M.2 SSDs the XFMEXPRESS socket and retention mechanism does not need tools.

XFMEXPRESS provides BGA SSD performance. Tosh said that the XFMEXPRESS connector was designed to allow for better heat dissipation with a metal lid that can serve as a heat spreader.

Last modified on 07 August 2019
Rate this item
(2 votes)
Tagged under
More in this category: « Is AMD Rome burning? Linux suffers from memory problem »
back to top