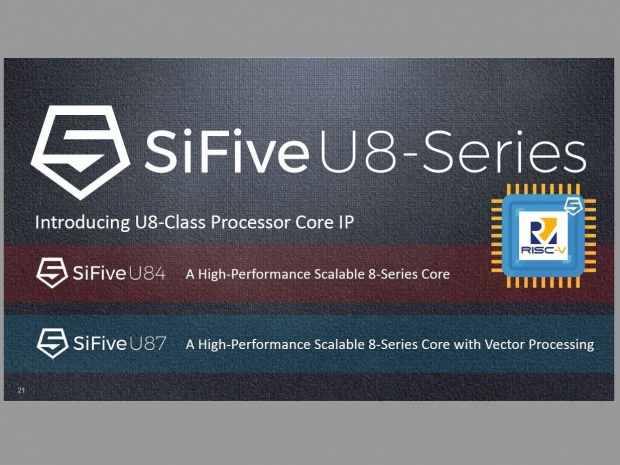 SiFive is a company founded by the inventors of RISC-V, and the company of now 550 employees is focusing on providing commercial RISC-V Processor IP and Silicon Solutions has just announced its next generation microarchitecture.

We had a chance to talk with Krste Asanovic, SiFive's Chief Architect, who used some of the time to present the new Out-of-Order Application Processor Core IP called SiFive U8 series.

As the name implies, U8 succeeds in the U7 series launched in 2018, and one of the key goals of this processor is to disrupt the market of endpoints, enterprise and networking as well edge computing and autonomous.

If you want to go a bit deeper endpoints include DTV / Smart Home, AR, VR,MR, Set-Top Box, Game Consoles and Digital Imaging. Enterprise and networking include 5G Wireless, Core/Edge Routers, Base Stations, and Access Points while Edge and Autonomous addresses autonomous vehicles, CDAS, IVI / Cluster, Head-up displays, and Telematics, military, and aerospace as well as robots and drones. Just by looking into this, one can imagine that they are going after the market that is currently dominated by ARM.

SiFive U8 series starts with U84

The new IP core design goals for the U8 series were 1.5X performance per watt, 2X area efficiency and class defining scalability. The area efficiency is based on SiFive internal estimates of SPEC Int/GHz per Watt, and Power per MM2 of SiFive U84 Core with L2$ in 16nm vs Competitor Core estimates of core implementation in 16nm.

To get the desired performance per watt, the company focused on SuperScalar, Out-Of-Order core with 10-12 Stage and triple-Issue, and wanted to achieve area efficiency with low power small configurable area that is at the same time extensible. The scalability part includes Parameterized microarchitecture with Composable Cache, Optional FPU, and  nine Core Mix + Match Cluster.

We don’t want to go too deep into microarchitecture, but the new U8 features advanced multi-level branch prediction, MMU with L2 backed TLB, Multiple issue Execution units as well as Efficient Register Renaming. The U8 fetch unit comes with configurable size and organization L1 cache and compressed instructions set with out of order resolution and direct and indirect jump and return capability from the fetch Queue.

The U8 dispatch and rename unit supports superscalar rename and dispatch as well as register update and program counter tracking with instruction group tracking.

The SiFive RISC V SoC supports a heterogenous core complex where a customer can mix U7 series with U7 series and even S7 series with PCIe and USB support and SRAM/DRAM or even HBM2E support.

Krste confirmed that the SiFive is working with some lead customers and that U84 will generally be available next year. The chip has been taped out, and the U87 is expected toward the end of next year.

James Prior, who takes care of PR and Analyst relations for the company, confirmed that the company has a lot of interest from end and edge point AI, automotive, and datacenter attach markets. The SiFive cores offer 10 percent more performance of Cortex A72 with half of area.

The A72 has been rather popular in automotive business, and the fact that someone can offer slightly more performance at half of die area makes a compelling case for a lot of customers.

Last modified on 25 October 2019
Rate this item
(0 votes)
Tagged under
More in this category: « Xilinx Advanced Products grew 29 percent in a year ARM will continue to supply Huawei »
back to top