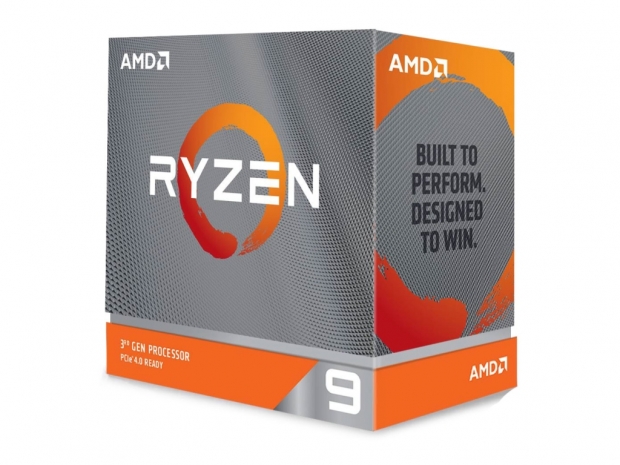 AMD has announced its newest Ryzen 9 flagship CPU which will fit into existing socket AM4 motherboards, the Ryzen 9 3950X. It is coming to retail/e-tail shelves on November 25th for $749.

In addition to two 3rd generation Threadripper CPUs, the 3960X and the 3970X, as well as the unlocked Zen+ based Athlon 3000G APU with Vega 3 graphics, AMD also announced the new Ryzen 9 3950X flagship CPU.

This 16-core/32-thread flagship will fit into existing AM4 socket motherboards, at least compatible ones and with the latest AGESA Combo PI 1.0.0.4B BIOS update. It works at 3.5GHz base and 4.7GHz Boost clocks, has a total of 72MB of cache (L2+L3), and the same 105W TDP. 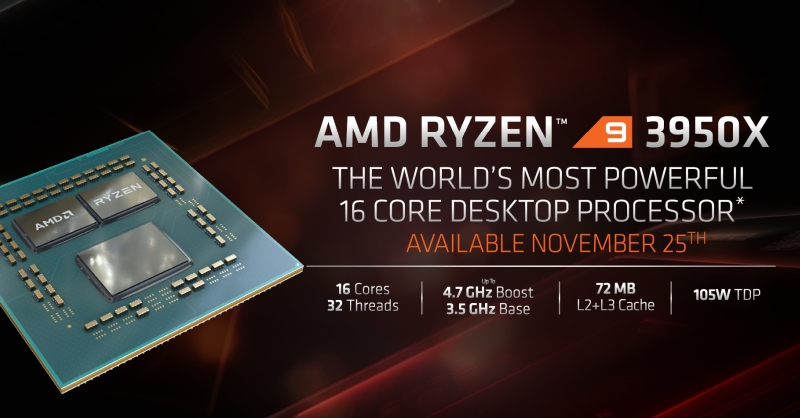 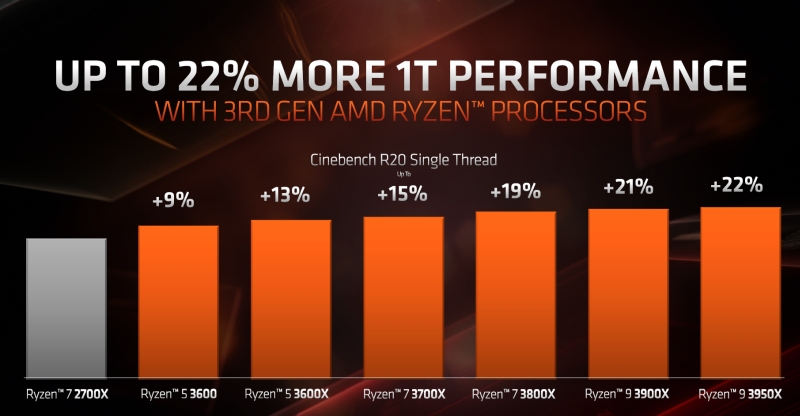 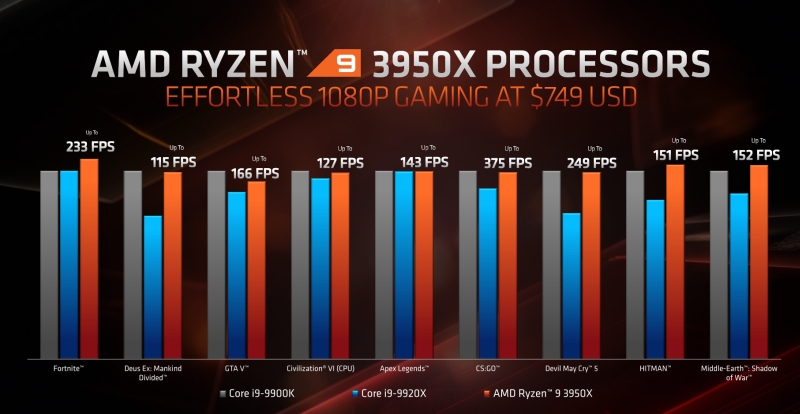 Showing that Ryzen 9 3950X is not only meant for games, AMD also unveiled a slide comparing it with these two Intel CPUs in "creator-oriented" applications and benchmarks, like Adobe Premiere, DaVinci Resolve, Handbrake, Cinebench R20, POV-Ray 3.7, V-Ray, and others. 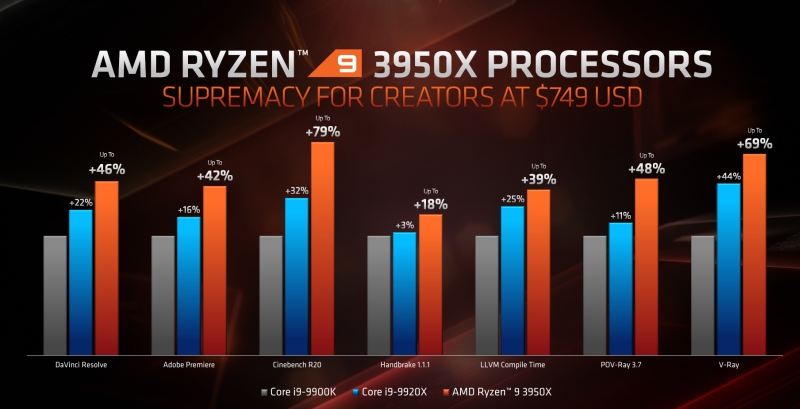 AMD also took a stab at Intel with power efficiency, showing that the 16-core/32-thread Ryzen 9 3950X draws much less than both of these Intel CPUs, offering up to 2.34x more performance per Watt. 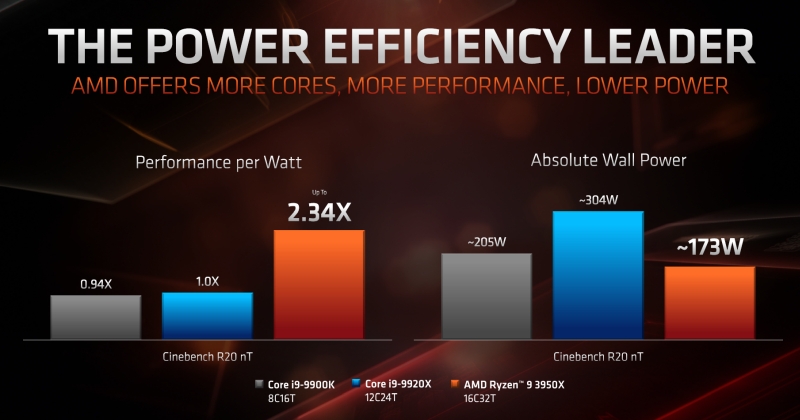 In a big surprise, AMD decided not to bundle the Ryzen 9 3950X with a "boxed" cooler, but rather say it is optimized for liquid cooling, recommending a 280mm or greater AiO liquid cooling. Of course, AMD says that standard aftermarket air coolers will work as well, as the TDP pretty much remained the same.

Another novelty is the "eco-mode" feature, which allows the 105W TDP CPU to run at 65W TDP, and 65W one to run at 45W limit. AMD promises that cooler operation and up to 44 percent lower power, but at up to 77 percent of full performance. Although it sounds like a nice feature that should appeal to HTPC or SFF crowd, we doubt anyone will use it on a high-end CPU, as you can simply go for a lower TDP CPU rather than hamper the performance of a high-end CPU. 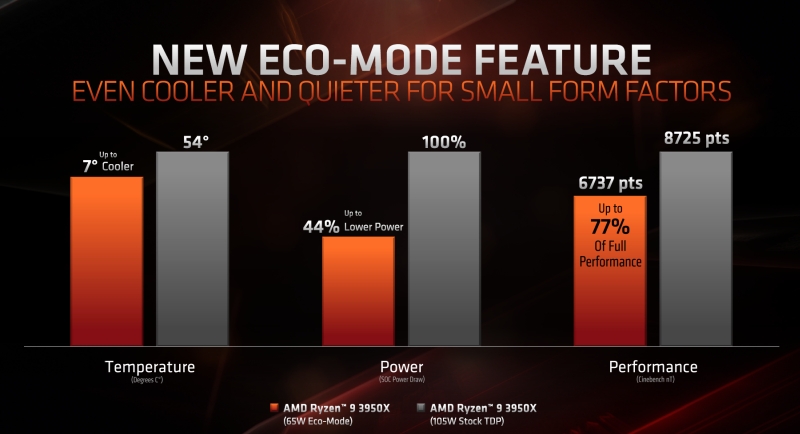 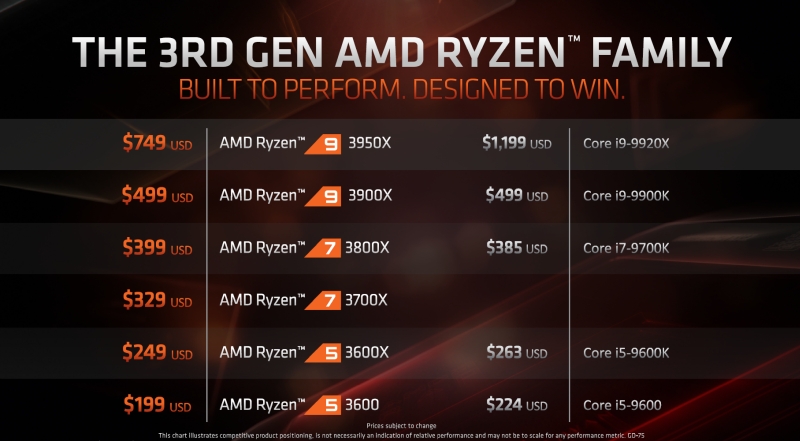