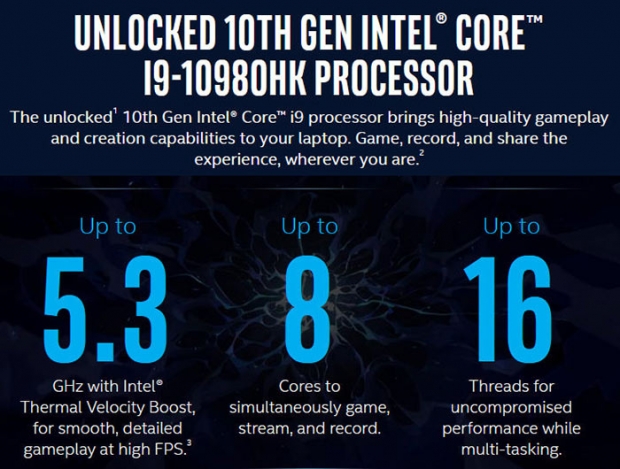 Will be out soon

A leaked slide from an upcoming official Intel presentation shows the merits and gubbins in a yet to be announced 'Unlocked 10th Gen Intel Core i9-10980HK processor'.

According to Nexus, this is a laptop CPU for gamers and content creators that will sport 8C/16T and run at up to 5.3GHz with Thermal Velocity Boost (TVB) technology.

The new Intel Core i9-10980KH will be the flagship of the mobile CPU line to be launched shortly.  A lower-powered version of this chip was seen in an Asus laptop which had been tested in 3DMark. In this Asus laptop, a 14nm Intel Core i9-10880H with 8C/16T ran at a base/boost of 2.3/5.0GHz.

TVB was introduced with the Intel Core i9-8950HK, Intel's first i9 for laptops, as well as the Intel Xeon E-2186M. This technology boosts the chip beyond normal maximum turbo speeds - "whenever processor temperature and turbo budget allows."

As a flagship part, the Intel Core i9-10980KH will appear in top of the line laptops for gamers and content creators.  It will probably appear in laptops which will cost an arm and a leg but will enable users to "game, record, and share the experience" while mobile. Not sure this has ever been a function I have needed.

The expected launch date of these processors will be 2 April. In our previous article about the Core i9-10880H, we saw a promo image from a Chinese laptop OEM naming this date for the release of 10th gen mobile H processors from Intel, and the availability of Nvidia RTX Super mobile GPUs.

Last modified on 30 March 2020
Rate this item
(0 votes)
Tagged under
More in this category: « HPE warns of SSDs about to fail Intel Core i9-10999K doubles current-gen performance »
back to top