Compared to the earlier announced U-series Tiger Lake CPUs, the new H-series 11th gen Tiger Lake mobile CPUs double the number of cores, and aims to cover three key notebook markets, essential, thin enthusiast, and halo enthusiast, as Intel decided to call them. The first one, called essential market, aims to pair up the new CPUs with mid-range GPU, offering 1080p gaming at 60FPS at medium to high settings. The thin enthusiast market covers 15-inch+ thin notebooks that offer gaming at 1080p at higher FPS and up to 4K at 60 FPS at lower settings, while the halo enthusiast market, goes for 4K 120FPS gaming at high settings, and these two will probably come paired up with a more capable GPUs. 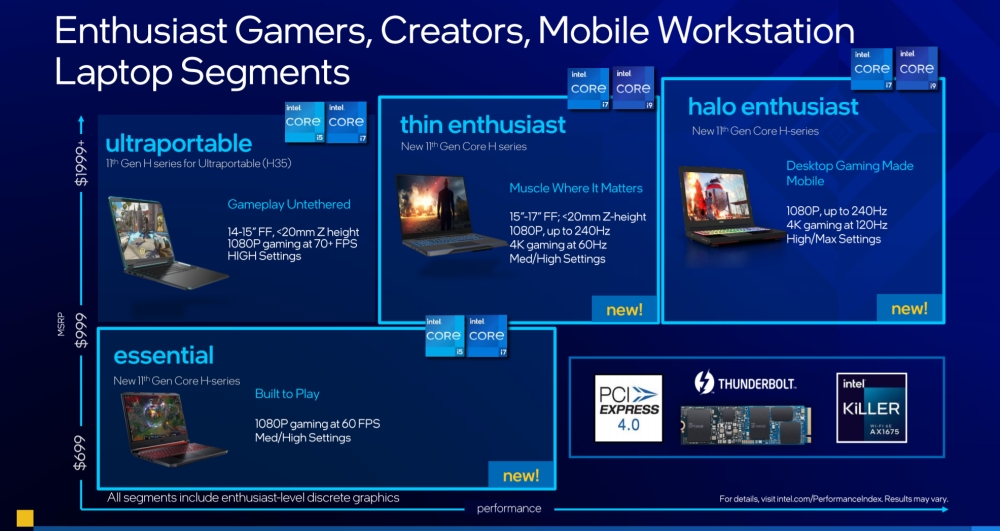 The entire lineup is based on Willow Cove CPU architecture, packing 1.25MB of L2 cache, up to 24MB of shared L3 cache, as well as Intel's latest Xe-LP graphics architectures with 32 EUs across the board. The TDP is set at 45W with range from 35W to 45W (65W+ on the flagship Core i9-11980HK), giving OEM makers a lot of wiggle room in terms of performance.

You can check out the full lineup in the table below. 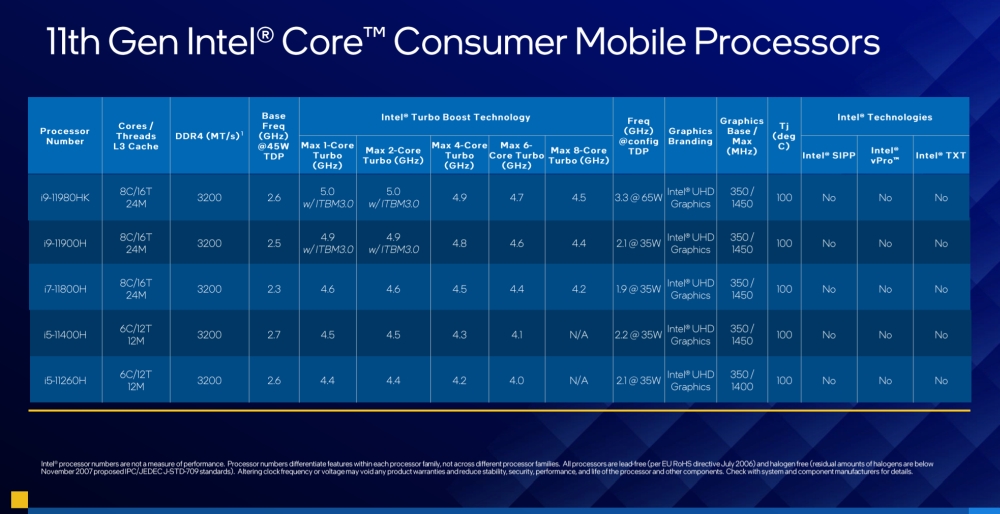 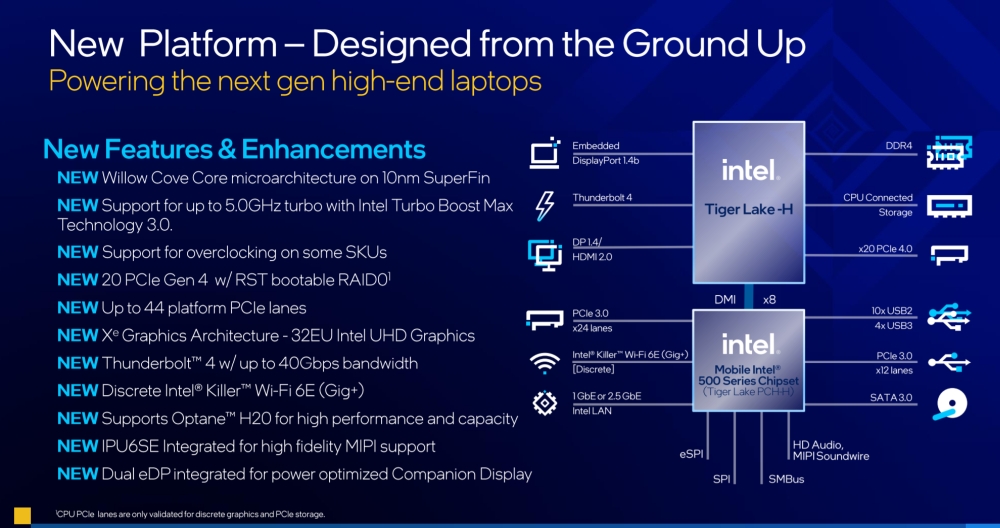 When it comes to performance, Intel has provided some of its own benchmark numbers, and, of course, we are looking forward to seeing some review benchmarks that should come soon.

In Intel benchmarks, the Tiger Lake-H are up to 19 percent faster compared to the last generation, or Comet Lake-H CPUs, and, according to Intel, can outperform Ryzen 9 5900HX in some benchmarks. Of course, the Ryzen 9 5900HX is a 45W CPU, and Intel's SKU was probably hitting 65W+. Hopefully, we will see some more non-Intel reviews soon. 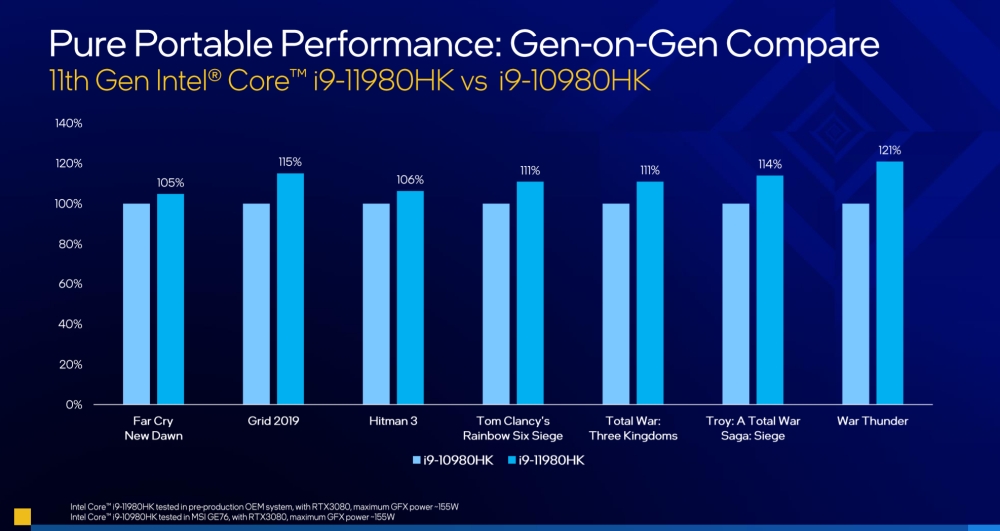 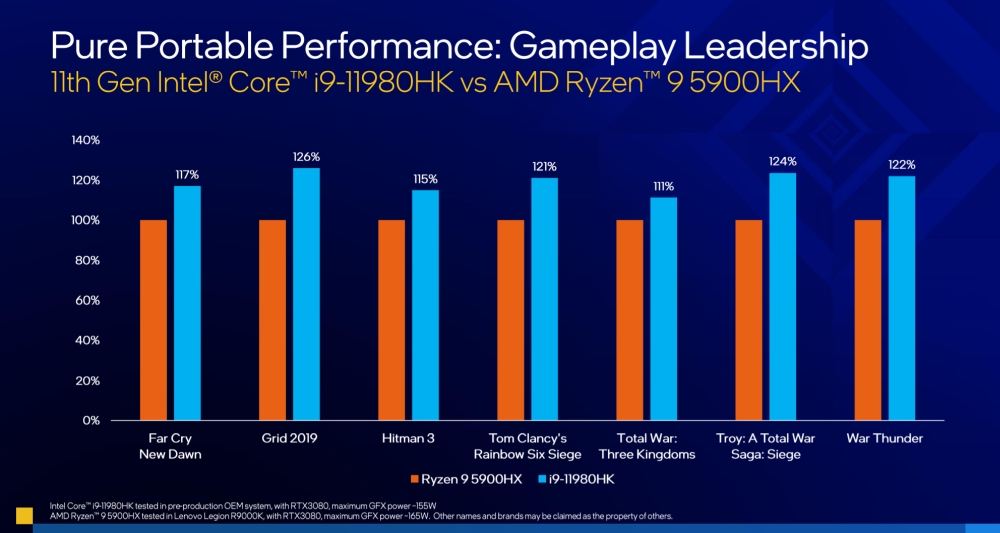 Intel says there are over 80 enthusiast design wins for Tiger Lake-H and some laptop makers have already announced their own laptops. Nvidia also announced its new RTX 3050 Ti and RTX 3050 mobile GPUs so these will probably be paired up with some of these laptops.

Intel was keen to note that it has shipped over one million 11th Gen H-series processors to partners worldwide.

In any case, Intel and laptop makers are expected to flood the market with these laptops soon. 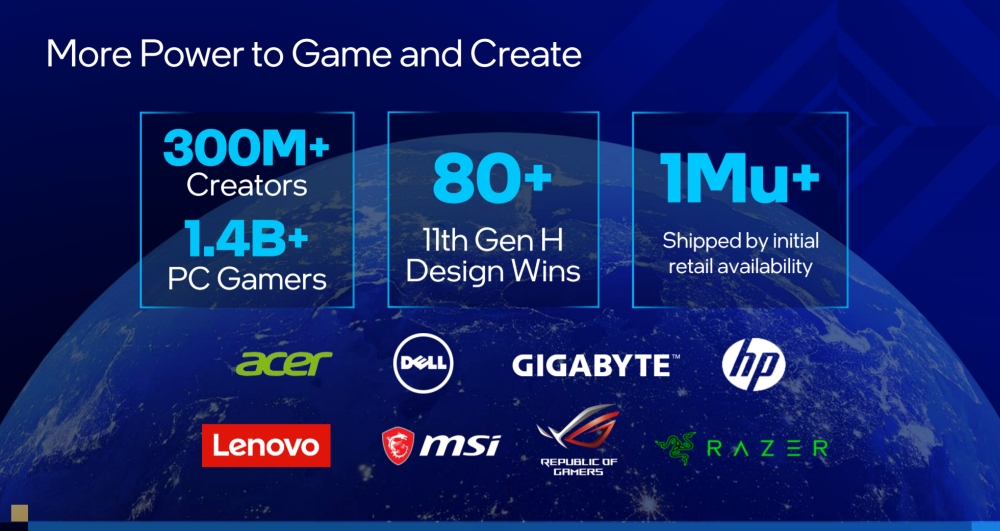 Last modified on 12 May 2021
Rate this item
(1 Vote)
Tagged under
More in this category: « AMD nibbles at Intel's server market Razer updates its Blade 15 gaming laptop with Tiger Lake-H »
back to top