Dell designs a laptop which can be fixed and recycled 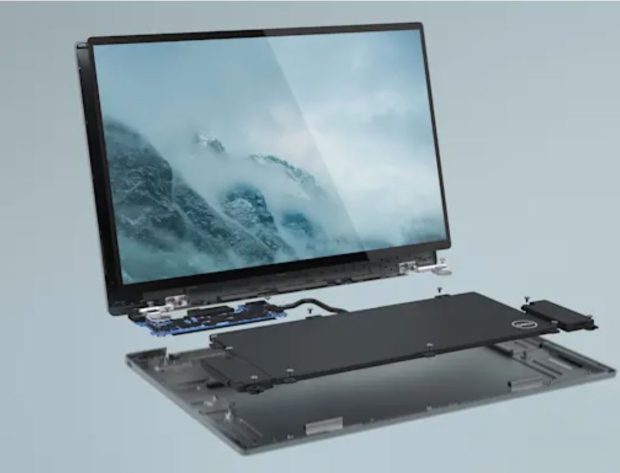 While Apple is doing its best to make its gadgets unfixable, other than by its staff or by using its expensive packs, Dell announced a new design concept for a laptop that's long lived, easy to take apart and fix.

While Apple bangs on about how green it is, Dell is calling its bluff  if  "Concept Luna" ever hits the shops that is. Luna has a number of unusual features that are intended to make repair and maintenance easy.

No screwdrivers or glue solvents are needed to pry loose a broken keyboard or peel off a cracked screen; both components simply pop free after a pair of keystones holding them in place are removed.

The entire system contains far fewer screws than a typical Dell laptop, reducing the time needed to replace components. And you'll never have to worry about replacing a broken fan, because there isn't one: a shrunken-down motherboard placed in the top cover allows the laptop to passively cool itself.

Dell design strategist Drew Tosh described Luna as a "front end concept" intended to "solve some of the larger problems we're trying to get ahead of in the future", namely e-waste and climate change.

It is a laptop that is easy to repair and upgrade is less likely to be replaced with a new one that takes yet more energy and resources to produce. When that computer eventually does stop working, parts can be harvested to live on in other machines rather than winding up as toxic trash in landfills.

So far, only several prototype versions of this laptop exist. But the design Dell is showing off is as sleek and portable as any laptop in the company's current lineup.

The aluminium in the chassis is smelted using hydropower energy, replacing what is often one of the dirtiest manufacturing steps with a low-carbon alternative. The motherboard is a quarter the size of the board in the Latitude 7300 AE, and according to Dell, it could have a 50 percent smaller carbon footprint.

A life cycle analysis of the Latitude 7300 AE found that manufacturing accounted for 65 percent of the device's climate impact and printed wire boards were the most energy-intensive components to make.

Last modified on 15 December 2021
Rate this item
(3 votes)
Tagged under
More in this category: « Intel spends $7 billion on Malaysian chip packaging plant India stumps up $10 billion to build chip factories »
back to top