AMD Overdrive wouldn’t allow clocks higher than 900MHz for the GPU or 1350MHz for the memory, but the same limitations apply in MSI Afterburner as well. In order to solve this, try some kind of driver uninstalling software like cleansweep, because you need to clear all driver settings before a fresh install.

You’re aware that HD 6950 cards can activate additional shader processors within the GPU. Using Techpowerup’s how-to, Winflash and PowerColor HD 6970’s BIOS (clocked at 940MHz for the GPU and 1425MHz for the memory), we managed to turn our PCS+ HD 6950 Vortex II into a PCS+ HD 6970 Vortex II.

As soon as we restarted the computer, GPUZ confirmed we’re running 1536 shader processors and at overclocked HD 6970 clocks.

Bear in mind that not all HD 6950 will allow for unlocking. In fact, our readers have confirmed that only certain PCS+ HD 6950 Vortex II cards will support this. It is possible that PowerColor handpicked most Cypress Pro cores that can do this and is selling them as AX6950 2GBD5-P22DH ++, which comes with 1536-shader enabled BIOS pre-installed on the card and accessible via the switch.

We fired up AMD Overdrive and saw that Catalyst Control Center recognizes the PCS+ HD 6950 Vortex II as a new graphics card. As you can see, the earlier limitation is gone after strapping the card with new BIOS, which suggests that the problem was in PowerColor’s BIOS.

The results we got after unlocking shaders are included in the tables below. You can find Aliens vs. Predator testing results here whereas the rest is in the ‘Test Results’ section.

It’s important to note that HD 6970 cards require one 8-pin and one 6-pin connector, while the PCS+ HD 6950 Vortex II comes with two 6-pin ones. In order for the new GPU (now with 1536 shader processors) to run at its max, you’ll have to do some PowerTune tuning. In the AMD Overdrive section of the Catalyst driver, you’ll have to set the Power Control settings slider all the way to the right (+20%). This will make sure that the overclocked GPU gets more power during gaming.

The next table shows results we got when Power Control slider was in default position, as well as after allowing the GPU to draw more power. We measured about 20W higher consumption in AvP after setting the slider all the way to the right. 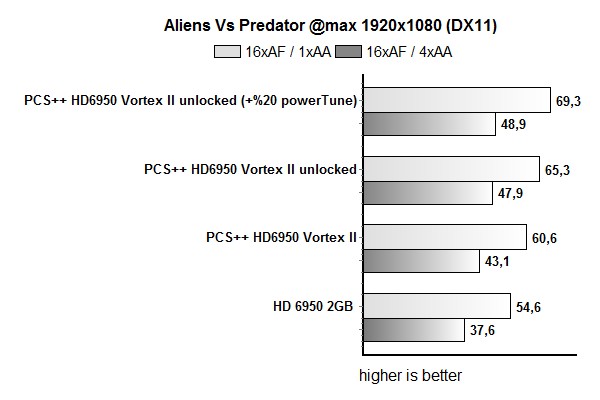 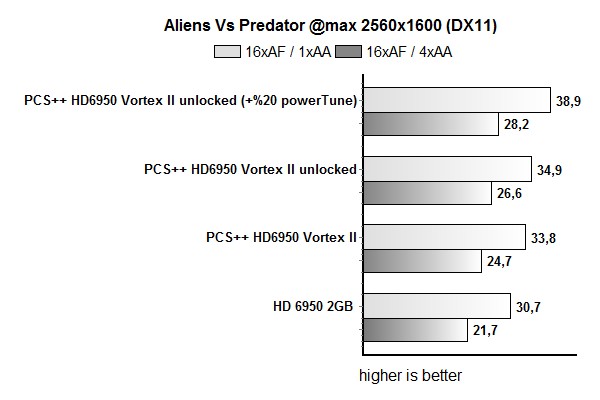 We measured almost 70W higher consumption after unlocking (with the GPU at 940MHZ) and additional 20W higher in AvP after setting the power slider inside Overdrive all the way to the right.

PowerColor PCS+ HD 6950 Vortex II’s cooling has proven it’s a quality solution that will keep the card well cooled, regardless of whether it’s in idle mode or under workload. GPU temperatures didn’t exceed 78°C during our gaming tests. The cooler was almost inaudible in idle operation (37°C). The cooler wasn’t loud, not even in intensive GPU operation.

After unlocking additional shaders, the Vortex II cooler was audible enough to be called loud, but bear in mind that we are talking about an overclocked card (940MHz for GPU and 1425MHz for memory). Still the PCS+ HD 6950 Vortex II (unlocked) cooler is never as loud as the reference HD 6970's cooling.