Tesla announces Model 3, an all-electric sedan for the masses 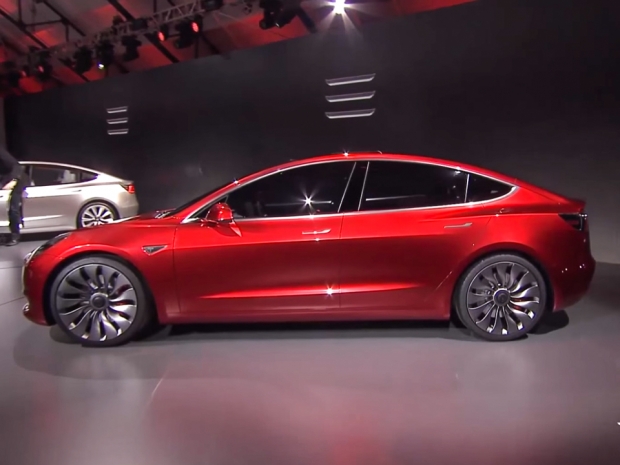 Standard Autopilot, 5-star safety, 0 to 60mph in less than 6 seconds

On Thursday evening at the Tesla Motors design studio in Hawthorne, California, the company announced its highly anticipated Model 3, a mass-market, all-electric sedan scheduled for release by the end of 2017. Tesla CEO Elon Musk took to the stage and announced to a cheerful audience that the new vehicle is now available for pre-order starting March 31st at a base price of just $35,000 (before further federal and state tax incentives), and will accelerate from 0 to 60 miles per hour in just under 6 seconds. 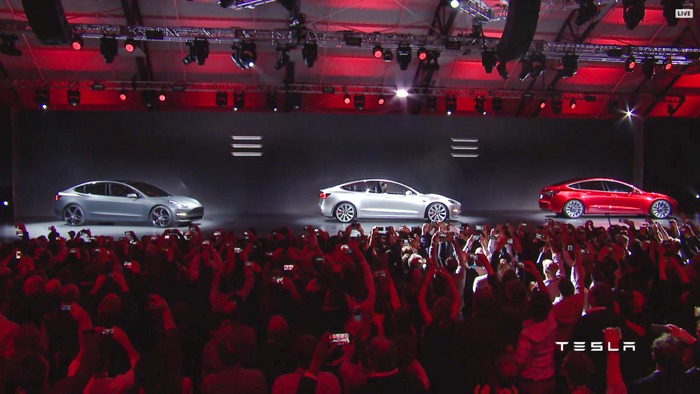 Tesla’s all-electric Model 3 sedan has been anticipated by consumers and investors for several months, and as of today, it is the company’s first true attempt to make up for the $4,000 of lost revenue on every Model S it has sold since Q4 2012. 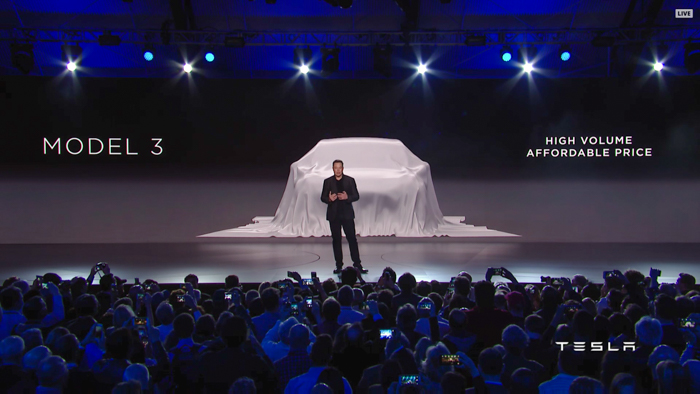 During the event, Musk explained that the revenue being driven by the Model S and the Model X are actually the financial ingredients needed to support the research, development and production of a more affordable Model 3. As such, he thanked Model S and Model X owners for their investments in the company as they have essentially set the ground for future Model 3 owners. Going a step even further back into last decade, he also thanked Tesla Roadster owners for funding the initial research and development of the Model S and Model X (Side note: a replacement for the Roadster is expected in 2019).

Tesla’s Model 3 will launch at a base price of $35,000 before federal and state tax incentives. It has a baseline range of up to 215 miles (346km) per charge and can accelerate from 0 to 60mph (97km/h) in less than 6 seconds. The vehicle is also expected to receive the highest 5-star crash and safety ratings from the U.S. National Highway Traffic Safety Administration (NHTSA) and European New Car Assessment Programme (Euro NCAP), just like its Model S and Model X counterparts. 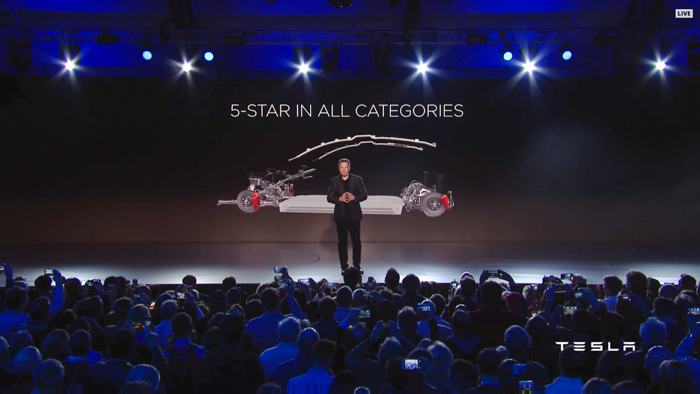 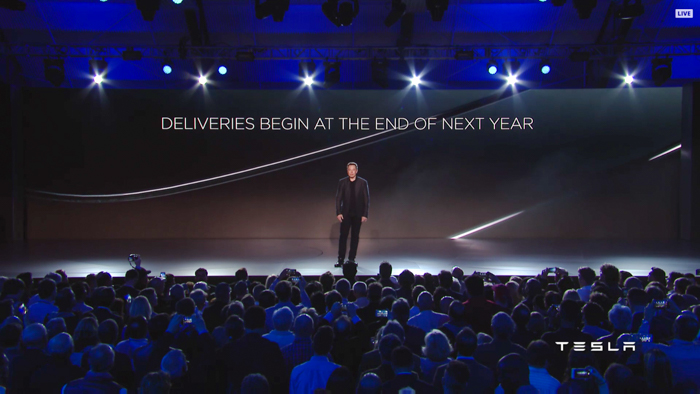 The vehicle is expected to begin production in Q4 2017, and Musk says he is "hoping" the company will be able to begin deliveries by the end of 2017. If not, then a Q1 2018 launch window will become more likely. Whatever the case may be, customers who placed reservations today or throughout April 2016 will likely be the only ones receiving vehicles during this expected launch timeframe. 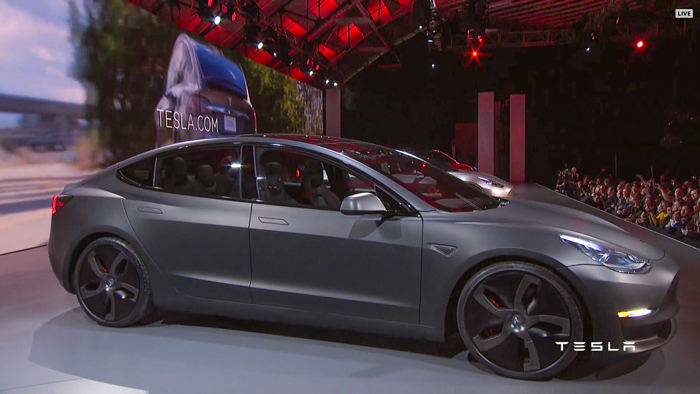 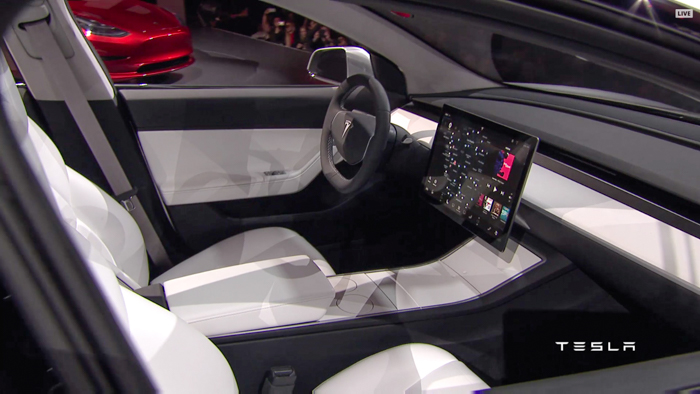 The new sedan will seat 5 people and is capable of fitting a 7-foot long surfboard along the inside of the vehicle’s passenger seating, rather than being mounted externally with a surfboard rack and straps. The vehicle also features dual luggage compartments, where passengers can store items both in the rear trunk and also beneath the front hood where a traditional gasoline motor would normally be placed. 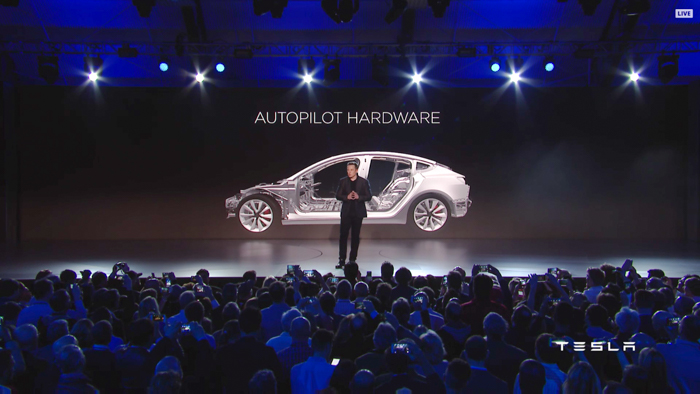 Finally, the new Model 3 will feature standard Autopilot algorithms and hardware. This is a big deal for a mass-market vehicle of any kind. Tesla currently charges an additional $2,500 to include this feature on its higher-end Model S and Model X crossover SUV.

We personally tested Tesla’s autopilot feature in a Model S 70D unit during its initial release in September 2015, and based on our experience, we feel that the safety and reliability of Tesla’s autopilot software is not quite ready for a general public debut. Often times, the system was not able to distinguish the trajectory of a two highway lanes merging into a single lane, often steering the vehicle slightly to the right or left. Even though the algorithm’s decisions were still logical and would not have caused any accidents, the system felt a bit rough around the edges, almost like a newly-licensed driver taking their first steps on a busy public highway. Tesla claims its users will receive free over-the-air (OTA) software updates to the Autopilot system, and we appreciate their ongoing efforts to make this an enjoyable driving feature rather than one marked by concern. 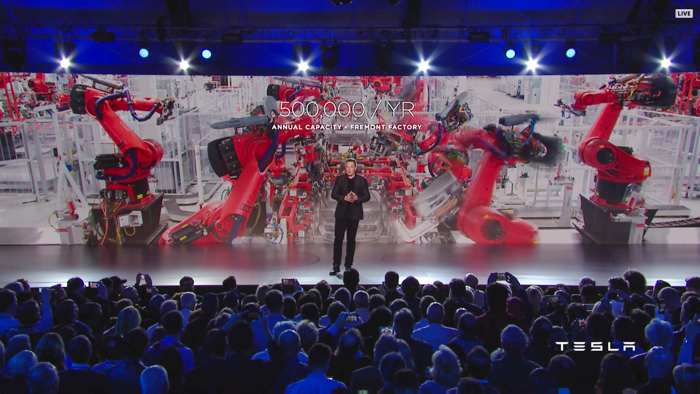 After cutting its production targets in 2015 and 2016, the company now reports that it can produce 500,000 vehicles per year at its Fremont, California factory. As we mentioned in our previous story, Ford first surpassed 10,000 deliveries with its highly-successful Model T in 1909, while Tesla surpassed that same amount in 2013. Between the seven-year period from 1909 to 1916, Ford went on to produce 501,462 Model T vehicles. Tesla’s new production numbers show it could be on track to produce more than 500,000 vehicles between the seven-year period from 2013 through 2020, so long as global automotive and lithium-ion battery markets remain relatively stable.

Tesla currently plans to begin operating its $1.6 billion lithium-ion battery factory, Gigafactory 1, at the Tahoe Reno Industrial Center in Nevada by the end of 2016. The company is projected to produce 35 gigawatt-hours per year of lithium-ion cells and 50-gigawatt-hours per year of battery packs by 2020. Yesterday, a drone captured some impressive Ultra HD 4K aerial footage of the 1.9-million square foot facility which can be found here.

A few minutes prior to the Model 3 announcement, CEO Elon Musk took a few minutes to address the carbon emissions crisis that is prevalent in the world at large. As of March 2016, estimates from the Mauna Loa Observatory in Hawaii are now reporting worldwide temperature increases at 2.5 fahrenheit (1.4C) since the pre-industrial late 1700s, with carbon emissions now at 403.5ppm (parts-per-million) [note: other studies have this number closer to 380ppm]. Global warming and surface temperature arguments aside, the presence of highly unnatural levels of CO2 has now been linked to at least 53,000 early deaths per year, based on a November 2013 particulate matter study by MIT. 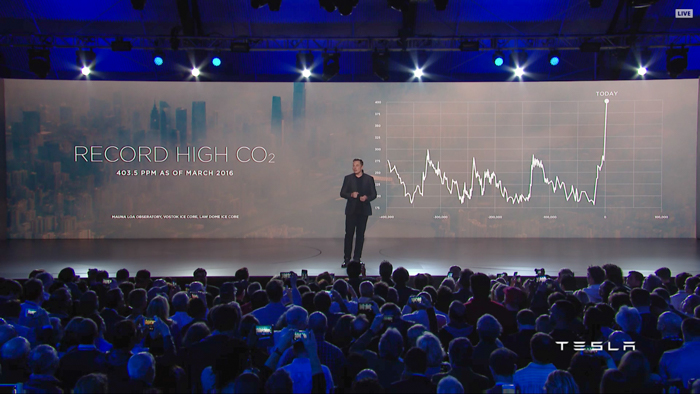 Since September 2012, Tesla has been rolling out hundreds of additions to its worldwide Supercharger network. As of March 2016, it has 613 worldwide Supercharging stations with 3,628 actual chargers. It also has about 3,600 "destination chargers," which are lower-amp chargers available at participating hotels, restaurants and public venues. By the end of 2017, the company wants to double the number of individual Superchargers to 7,200 worldwide and quadruple the number of destination chargers to 15,000. Lastly, the company plans to double the size of its retail footprint, from 215 current worldwide locations to 441 by the end of 2017. 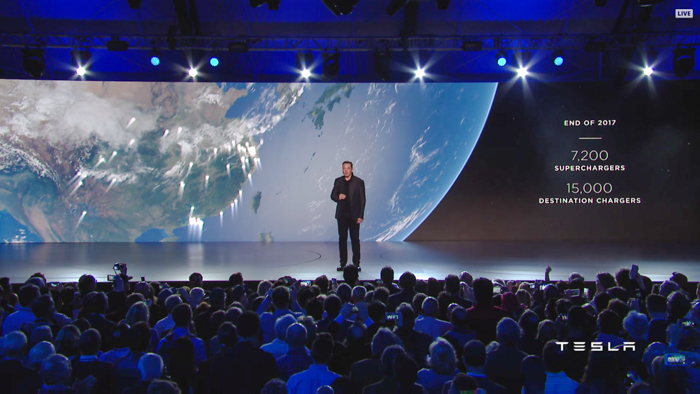 Now is the time to place reservations, not 2017

So far the company has received a total of 115,000 reservations for the Model 3 in just 24 hours, and we expect this number to grow quickly over the weekend. For any prospective owners, this weekend is likely the best time to place a reservation online or visit a local Tesla dealership, as this model is expected to reach the full 500,000-unit production capacity very quickly and may not be readily available in the months following its expected Q4 2017 or Q1 2018 launch window.

Last modified on 01 April 2016
Rate this item
(9 votes)
Tagged under
More in this category: « Tesla Model 3 unveil happens today at 8:30pm PDT Best year in the last seven for Huawei »
back to top