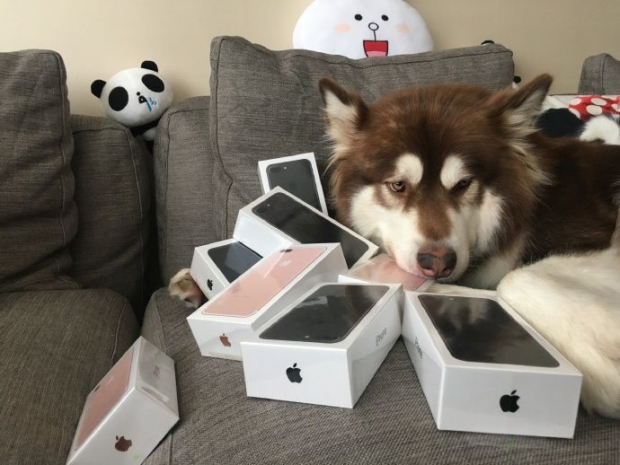 Dog likes a phone that hisses at him

The son of China’s richest man, and probably the wealthiest Apple fanboy in the world, has spent a fortune buying eight iPhones for his dog.

Coco, an Alaskan malamute, is now the proud new owner of eight Apple iPhone 7 devices. The photos of Coco lounging on a couch with 8 unopened iPhone 7 boxes were posted onto the dog's official Weibo account. We are not sure how Coco did this given that he lacks opposable thumbs.

Coco is clearly an intelligent dog and does not try to eat the iPhones, which we expect most dogs would do. We think that he would like the iPhone because of its high pitched hiss, which comes when the Apple designed chips start to crank up to anything like a volume load.

His owner, Wang Sicong, is the son of Wang Jianlin, China's richest man. Wang the Elder is the CEO of Dailan Wanda, the country's biggest real estate developer and is worth $33.7 billion.

To put Coco’s iPhone use into perspective the the standard 32 GB iPhone 7 costs about $810. That means Wang Sicong spent at least $6,000 on iPhones. For his dog.

Coco was also the proud owner of the first Gold edition of the Apple Watch – each one of the gold Watch Edition gadgets sold for up to $17,000. We think Coco would have been much happier with a nice biscuit.

To be fair, Coco is a very good dog and has never complained about the gifts from his owner being useless, unless the fact he immediately licked his arse was trying to communicate something significant to his owner.  Other than that he is the perfect iPhone customer – can't write his own name, always does what he is told, never uses any of the super cool functions and never complains about the product. Unlike most Apple fanboys he can also lick his own genitals which we suspect most Apple fanboys consistantly try and fail.

Last modified on 21 September 2016
Rate this item
(12 votes)
Tagged under
More in this category: « Google’s Allo App is a little too Snoopy Nvidia’s Tesla is ahead of the automation pack »
back to top