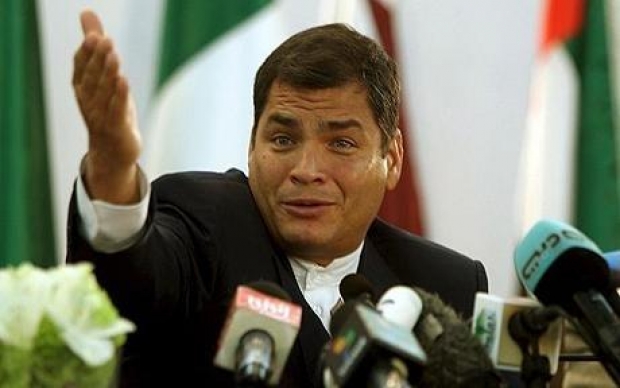 Stop interfering in the US elections

The Ecuadorian government has had enough of Julian Assange trying to game the US elections with Russian supplied propaganda and has pulled the plug.

Assange, who is holed up in the Ecuadorian embassy to avoid arrest on sex charges, has been publishing emails supplied by the Russian government designed to help Putin’s favorite Donald Trump win. While many of the emails are valid and interesting, we have no idea of the context or if they have been doctored by Russian spooks.

This put the Ecuadorians in a tricky position diplomatically. Its left-wing government has made it clear it does not want Trump to win, but at the same time allowing Assange to broadcast the Russian hacks means they are “assisting” Putin’s attempts to game the US election.

Assange made a big splash last week claiming that a state power had cut him off from the internet to stop the leaks of the Democratic emails. The implication was that it was the US government who had done it to silence him, but now Ecuador has fessed up.

It said that the it is keen not to be seen to be interfering with, or allowing interference with, the US election, saying it "respects the principle of non-intervention in the internal affairs of other states".

Ecuadorian officials have issued a statement saying that Assange's internet access had been cut because "in recent weeks, WikiLeaks has published a wealth of documents, impacting on the US election campaign".

The Government of Ecuador respects the principle of non-intervention in the internal affairs of other states. It does not interfere in external electoral processes, nor does it favour any political candidate. Accordingly, Ecuador has exercised its sovereign right to temporarily access to some of its private communications network within its Embassy in the United Kingdom.

This temporary restriction does not prevent the WikiLeaks organization from carrying out its activities, it just stops Assange fronting them from the Embassy. Of course to someone like Assange, it is no fun if his face is not on the leaks because people will not see him.

Last modified on 19 October 2016
Rate this item
(10 votes)
Tagged under
More in this category: « Sharp might be waking up FBI Czech Russian hacker »
back to top