Got to fold a little

A new report from the folks at Kolon Industries says that foldable smartphones could make up 20 percent of overall market share, at least in South Korea, during the year after which they are expected to begin mass production.

As of now, there are three to five technology companies expected to mass produce foldable phones globally in 2018, according to Kang Chung-seok, an executive at Kolon Industries. The company’s flexible colorless polyimide division, headed by Kang, is currently the only one in the world capable of producing the material, which will become a key technology responsible for replacing rigid glass sheets with flexible films for use in foldable OLED devices. 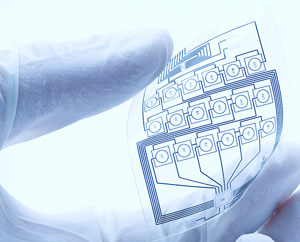 According to industry sources, Kolon Industries is expected to be a key supplier for flexible, rollable and foldable devices in the near future, with partners including Samsung Electronics, LG Electronics and BOE, though the companies have not confirmed this officially.

In August, the company successfully “taped out” its optically transparent material in thicknesses ranging from 10 µm to 100 µm, making ideal for flexible electronics with a high endurance ratio. It plans to begin mass production of around 100 million film sheets for foldable devices in 2018.

With some of the first foldable devices expected to be released next year, he predicts that they will have a bend radius of 5 millimeters as opposed to the market’s more common 1 millimeter estimate. When the bend radius is smaller, the material has more flexibility. At 1mm, both sides of a panel can almost be completely folded onto each other, while a higher radius will produce a less flexible arc curvature.

“The bend radius of 1 millimeter is the most ideal but that may cause a safety issue,” Kang said in an interview with The Korea Herald. “So, tech companies are likely to unveil the bend radius of 5 millimeters first and then gradually unveil devices with less bend radius.”

Last modified on 24 December 2016
Rate this item
(0 votes)
Tagged under
More in this category: « Consumer robotics may not see much demand next year HTC sends invites to product event on January 12th »
back to top