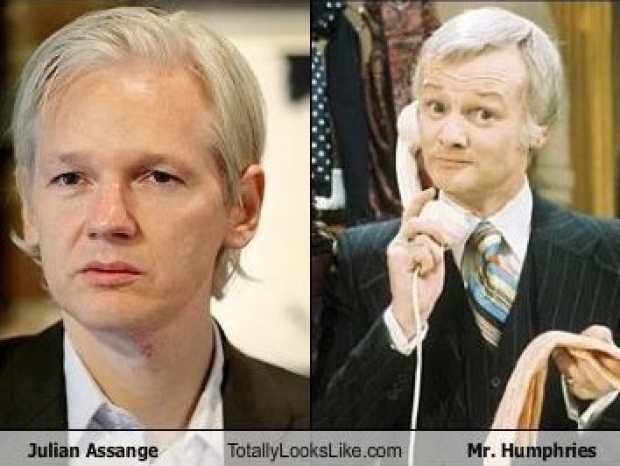 Stop talking, you are embarrassing us

Officials announced on Wednesday they were taking the measure in response to Assange’s recent activity on social media. As part of an agreement between Assange and the Ecuadorean government, he is not permitted to send any messages that could interfere with the South American nation’s relations with other countries.

However, Assange used Twitter to defend his chum and number one supplier of leaked documents Vladamir Putin. Putin thought it would be a wizard wheeze to use a nerve agent attack on Sergei Skripal and his daughter Yulia.  The UK and 20 other countries expelled Russian diplomats.

"While it is reasonable for Theresa May to view the Russian state as the leading suspect, so far the evidence is circumstantial, and the OCPW has not yet made any independent confirmation, permitting the Kremlin to push the view domestically that Russia is persecuted," he tweeted.

We guess it is ok for Russians to use nerve gas on dissidents on foreign soil but if the US does anything similar it needs to be whistleblown.

That comment went down like a bucket of cold sick with the UK government with UK Foreign Office minister Alan Duncan responding to his comments by branding the Australian a "miserable little worm" who needs to turn himself over to authorities.

Assange might take comfort in the fact that the Russian government's online fake news press arm Sputnik News claims that the whole world supports him and feels that Ecuador should allow him to continue to help him carry out his defence of Mr Putin.

In May 2017, Ecuadorian President Lenin Moreno asked Assange to refrain from expressing his public support for the independence campaign in Spain's Catalonia region after he tweeted that Madrid was guilty of "repression".

Assange has been living in Ecuador’s embassy for more than five years. Ecuador gave Assange asylum after he sought refuge in the embassy to avoid extradition to Sweden for investigation of sex-related claims. Sweden dropped the case, but Assange remains subject to arrest in Britain for jumping bail.

Last modified on 29 March 2018
Rate this item
(0 votes)
Tagged under
More in this category: « Boeing hit by WannaCry Nvidia denies its tech was involved in Uber crash »
back to top