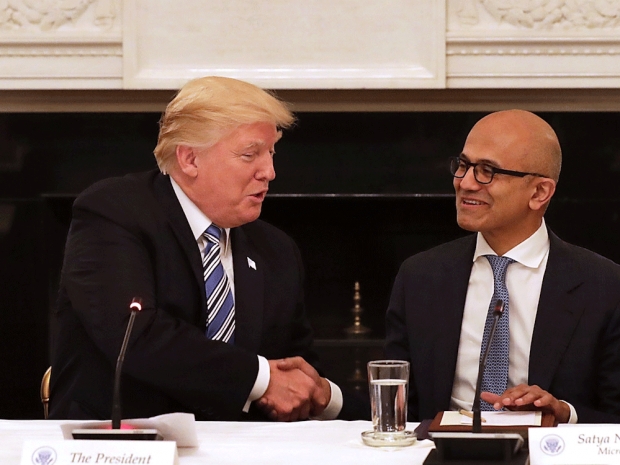 Can't get the staff

Software king of the world Microsoft is considering moving more of its operations overseas because Donald (Prince of Orange) Trump will not allow it to bring in more foreign workers.

Trump has insisted that the only reason that outfits like Microsoft don't hire more US staff is because they have become too dependant on cheaper foreign workers.  His logic is that if visas are cut for foreign workers, Microsoft will be forced to give work to North Americans instead.  Obviously he has applied this policy at Trump Towers where cleaning staff are all white American men.

There was of course another way, which was a little more obvious.  Microsoft could simply up-sticks to somewhere where visas are less of a problem and make more US workers redundant.  You will never guess what Vole is thinking of doing.

President and Chief Legal Officer Brad Smith said that while Microsoft does not want to move jobs out of the United States certain decisions out of Washington could potentially force its hands.

"The Trump Administration's tough stance on immigration has attracted a lot of criticism from big technology firms, which rely heavily on skilled foreign workers from around the world."

To be fair, Microsoft is not a big fan of Trump and his doings. Smith previously spoke out against efforts to stop the Deferred Action for Childhood Arrivals (DACA) program -- an Obama-era policy that provides legal protection for young immigrants brought to the US illegally as children. Microsoft has advocated the protection of DACA and more broadly supported immigration as a way to make sure US companies are hiring talented people.

"We do worry about a couple of the very specific immigration questions that people appear to be debating in Washington", Smith told CNBC's Akiko Fujita in an interview on Wednesday.

"We don't want to move jobs out of the United States and we hope that we don't see decision making in Washington that would force us to do that", he said, adding that Microsoft has been openly speaking to people in Congress, at the White House and even the Canadian government to safeguard the interest of its employees. Microsoft has a development center in Vancouver, which Smith described as a "bit of a safety valve." "We're not going to cut people loose. We're going to stand behind them", he added.

Last modified on 13 July 2018
Rate this item
(0 votes)
Tagged under
More in this category: « Kiwis come up with colour X-rays Broadcom loses $18.9 billion after CA deal »
back to top