DoJ claims Assange colluded with the Russians in the US elections 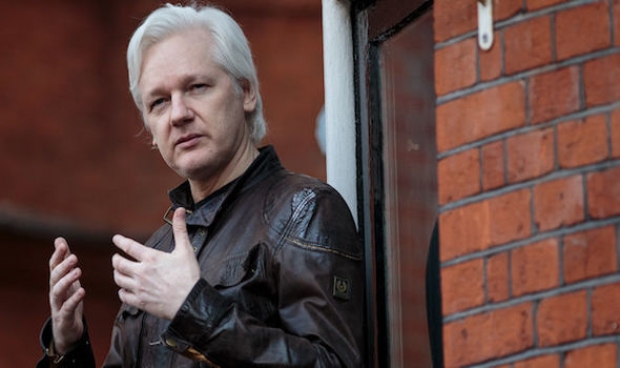 While Julian "Look at me" Assange might have believed he would be arrested for spying on the US, it looks like he will be charged for colluding with the Russians to get Trump elected.

Associated Press has found DOJ indictments suggest WikiLeaks received material from Russia's Main Intelligence Directorate of the General Staff and even gave Russian hackers advice on how to disseminate it.

All this flies in the face of what one of Julian Assange’s biggest media boosters -  Fox News reported him saying. In an interview ,Assange denied getting the emails from  Russia or anybody associated with Russia,

“Yes. We can say — we have said repeatedly — over the last two months that our source is not the Russian government and it is not a state party”, Assange said.

The Justice Department’s indictment Friday of 12 Russian military intelligence officers undermines those denials. And if the criminal charges are proved, it would show that WikiLeaks (referred to as “Organization 1” in the indictment) received the material from Guccifer 2.0, a persona directly controlled by Russia’s Main Intelligence Directorate of the General Staff, also known as GRU, and even gave the Russian hackers advice on how to disseminate it.

Whether Assange knew that those behind Guccifer 2.0 were Russian agents is not addressed in the indictment. But it seems unlikely that Assange, a former hacker who once boasted of having compromised US military networks himself, could have missed the extensive coverage blaming the Kremlin for the DNC hack.

Assange himself said that he exercised exclusive control over WikiLeaks’ releases and he was the only one who knew exactly what’s going on with its publications.

On June 22, 2016, by which point the online publication Motherboard had already debunked Guccifer 2.0’s claim to be a lone Romanian hacker, WikiLeaks sent a typo-ridden message to the persona, saying that releasing the material through WikiLeaks would have “a much higher impact than what you are doing”, the indictment states.

“If you have anything Hillary related we want it in the next (two) days pref(er)able because the DNC is approaching and she will solidify bernie supporters behind her after”, says a message from July 6, 2016, referring to the upcoming Democratic National Convention and Clinton’s chief party rival, Bernie Sanders.

Assange’s eagerness to get his hands on the alleged material from GRU reflected in the indictment — and prevent anyone else from beating WikiLeaks to the punch — is also revealed in leaked messages to journalist Emma Best. She, like several other reporters, also was in communication with Guccifer 2.0.

“Please ‘leave’ their convers(a)tion with them and us”, WikiLeaks said on August 13, 2016, arguing that the impact of material would be “very substantially reduced” if Best handled the leak.

Best told BuzzFeed she dropped the matter. About an hour after the conversation ended, Guccifer 2.0 announced on Twitter that it was sending a “major trove” of data and emails to WikiLeaks.

The indictment also puts to rest a conspiracy theory, carefully nurtured by Assange and his supporters, that slain DNC staffer Seth Rich was at the origin of the leaks.

Rich died in July 2016 in what police in the District of Columbia say was a botched robbery. But the tragedy became fodder for conspiracy theorists who pushed the unfounded allegation that Rich, 27, had been providing information to the hackers and was killed for it.

It was Assange who first floated the idea into the mainstream, bringing up Rich’s case in an interview with Dutch television the following month.

“What are you suggesting?” the startled anchor asked him.

“I’m suggesting that our sources take risks and they become concerned to see things occurring like that”, Assange answered.

The anchor pressed Assange repeatedly, eventually saying: “It’s quite something to suggest a murder. That’s basically what you’re doing.”

Over the next few months, WikiLeaks would continue to amplify the conspiracy theory — all while stopping short of endorsing it outright. During all this time, the indictment alleges, WikiLeaks knew full well that Guccifer 2.0 was its source, cajoling the account’s operators to hand it more data and ordering rival journalists to steer clear.

Assange could soon be removed from the Ecuador Embassy in London as the country’s new President steps up work to kick him out .But now, Foreign Office minister Sir Alan Duncan is said to be involved in the diplomatic effort, which has come weeks ahead of a visit by new Ecuadorian president, Lenin Moreno, who called Assange an “inherited problem”.

If he does leave the embassy he will be arrested for breaking his bail conditions six years ago.  While the Swedes may no longer want him on sex charges the US goverment might take the opportunity to extradite him to face charges connected to the Russian collusion. Ironically this was just what Assange feared in the first place, only this time it is happening outside his own head, and he actually appears to have done it to himself.