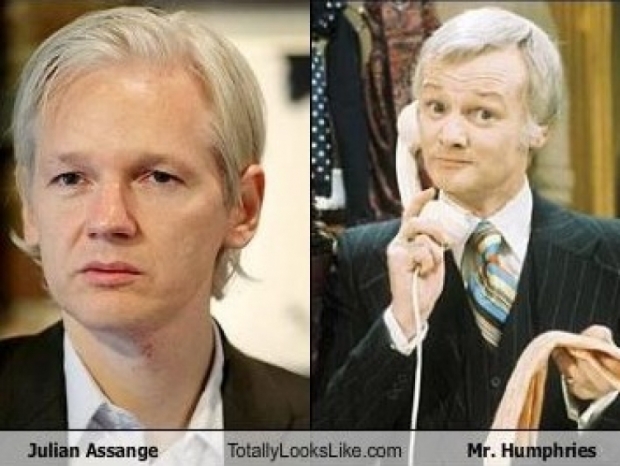 Worried he will end up in a US court

Mr Humphries look-alike and the person who published Russian supplied emails to help Donald Trump get elected, Julian Assange, is launching a legal challenge against the Trump administration.

Lawyers for the Australian activist have filed an urgent application to the Washington-based Inter-American Commission of Human Rights (IACHR) aimed at forcing the hand of US prosecutors, requiring them to "unseal" any secret charges against him.

The legal move is an attempt to prevent Assange's extradition to the US at a time that a new Ecuadorian government has been making his stay in the central London apartment increasingly inhospitable.

The 1,172-page submission by Assange's lawyers calls on the US to unseal any secret charges against him and urges Ecuador to cease its "espionage activities" against him.

Baltasar Garzon, the prominent Spanish judge who has pursued dictators, terrorists and drug barons, is the international coordinator of Assange's legal team.

He has said the case involves "the right to access and impart information freely" that has been put in jeopardy.

" The Trump administration is refusing to reveal details of charges against Assange despite the fact that sources in the US Department of Justice have confirmed to the media that they exist under seal.

The application alleges that US prosecutors have begun approaching people in the US, Germany and Iceland and pressed them to testify against Assange in return for immunity from prosecution. Those approached, it is said, include people associated with WikiLeaks' joint publications with other media about US diplomacy, Guantanamo Bay and the wars in Iraq and Afghanistan.

Last modified on 24 January 2019
Rate this item
(0 votes)
Tagged under
More in this category: « Apple and Microsoft cuddle up to Brazil president Bing switched off in China »
back to top