Apple and Microsoft cuddle up to Brazil president 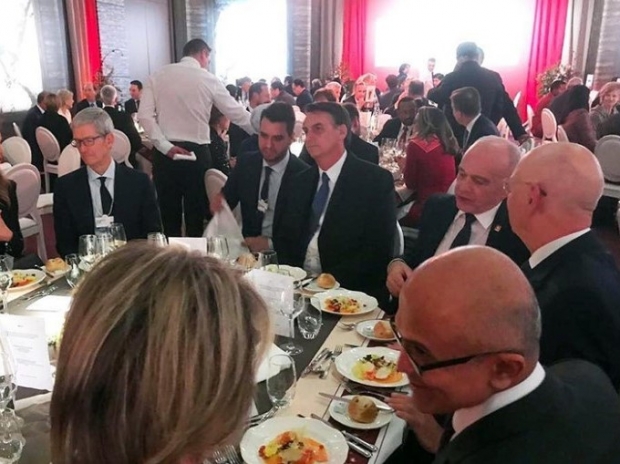 Women, minorities, and the LGBTs - they must have had a lot to talk about.

Apple and Microsoft CEOs found themselves at dinner with the homophobic, sexist Brazilian president Jair Bolsonaro at the World Economic Forum .

Tim Cook and Satya Nadella were attending a dinner at the annual gathering of the world's elite in Davos, Switzerland. The event was held at the Morosani Hotel in honour of Bolsonaro — who took office in October — and was attended by other business leaders and politicians.

It's unlikely that Bolsonaro would have been either Nadella's or Cook's dining partner of choice.  After all, Cook is gay, and Bolzonaro thinks gay people should "die in an accident" and "lower property values".  His views on destroying the rain forest would not have sat well with Nadella either.

The tide of populism that saw Bolsonaro elected president has been compared to US president Donald Trump's election in 2016 but is more to do with the collapse of the scandal-ridden left wing.  He is famous for saying things that even Trump would consider a little off colour.   He once told a lawmaker that she was "too ugly to rape".

Bolsonaro said in a tweet: "We have just attended dinner with great business leaders and heads of state at the invitation of the President of the World Economic Forum, Professor Schwab. A tremendous satisfaction sharing this moment and sharing experiences."

It wouldn't be the first time Cook and Nadella have had to court a controversial leader. The pair met with Donald Trump in December, along with other high-profile execs such as Facebook COO Sheryl Sandberg and Alphabet CEO Larry Page.

So far no one is saying what they talked about. Probably comments about the weather would have dried up quick. It's an unfortunate look for the pair, who were seated at the same table as Bolsonaro and were clocked by Axios reporter Felix Salmon, who tweeted a photo of the group.

Last modified on 23 January 2019
Rate this item
(0 votes)
Tagged under
More in this category: « Big Tech pays a king's ransom to lobby politicians Assange sues his chum Donald Trump »
back to top