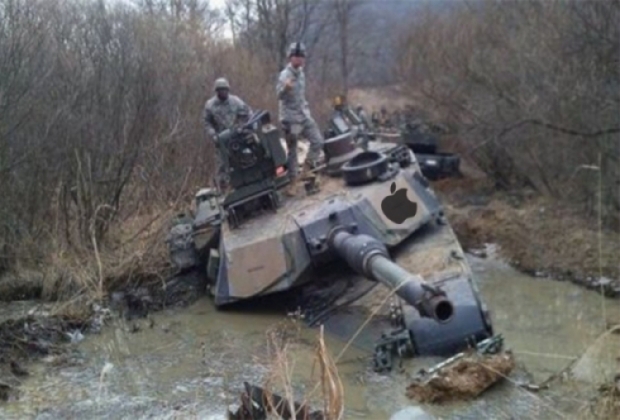 Slashes prices for clever foreigners and punishes the stupid

Fruity cargo cult Apple has told the world+dog that the iPhone is tanking making its results miserable for the first time in 16 years.

Apple’s solution appears to be to prop up its weak sales by cutting prices in countries where people are intelligent enough to realise that it is not a good deal, while keeping its hyped price tags in countries, such as the US, which are stupid enough to pay up.

Job’s mob blamed its poor figures on the economic slowdown in China and diminishing demand for new iPhones.

In addition to the quarterly earnings, Apple reported revenue of $84.3 billion, a decline of five percent from one year ago.

"Revenue from iPhone declined 15 percent from the prior year, while total revenue from all other products and services grew 19 percent", Apple said in a press release.

Analysts had estimated revenue of $83.97 billion and earnings of $4.17 per share.

"While it was disappointing to miss our revenue guidance, we manage Apple for the long term, and this quarter's results demonstrate that the underlying strength of our business runs deep and wide", said Tim Cook.

Apple's active install base of 1.4 billion is "a great testament to the satisfaction and loyalty of our customers, and it's driving our services business to new records thanks to our large and fast-growing ecosystem", Cook said.

The Tame Apple Press is having difficulty reporting the bad news. Its personal free press office, the New York Times, congratulated Apple on beating the analyst's expectations when the figures announced by Jobs' Mob only were a cent better than the analyst average.

The Verge decided that it was better to emphasise the good news in the results.  IPads were up 17 percent against the year-ago quarter; Mac was up nine percent and Wearables/Home/Accessories were up by 33 percent.

The company said it expected between $55 billion and $59 billion in revenue in the current quarter, just below analysts' expectations for $59 billion.

Apple appears to have worked out that increasing iPhone prices when there was no corresponding technology boost was a dumb idea.

It has decided to lower prices in countries which were not stupid enough to fall for the price hikes. This means that Americans, who were stupid enough to pay over the odds for their iPhones will be allowed to keep paying the same price. While Chinese customers who realised they could buy a better phone for less will see the price of their iPhones fall.

Apple Chief Executive Tim Cook disclosed the plan on Tuesday although he did not say who are the stupid countries and who were the clever countries.

Resellers in China already began cutting iPhone prices earlier this month after Apple lowered its sales forecast for the quarter ended in December.

The company priced its new iPhone XS, which was released in September, at $999, the same price in US dollars as its predecessor, 2017’s iPhone X.

Apple appears to be blaming the strong US dollar for its current pricing woes.

On Tuesday, Cook said Apple will adjust foreign prices in some markets by resetting them at or close to what they were one year before in local currencies. Effectively that means Apple will absorb the cost of the strengthening dollar.

“We’ve decided to go back to (iPhone prices) more commensurate with what our local prices were a year ago, in hopes of helping the sales in those areas”, Cook told Reuters in an interview.

Last modified on 30 January 2019
Rate this item
(0 votes)
Tagged under
More in this category: « One co-ordinated cyber attack could cost billions Internet explorer dead by 2020 »
back to top