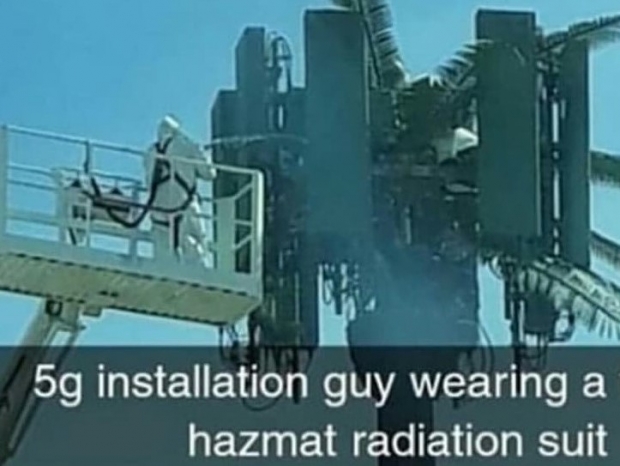 Russian troll-farms are engineering the current upswing in the amount of anti-5G information which is suddenly appearing on social media.

For those who didn’t notice, an incredible amount of rubbish has appeared on social networking sites claim that 5G will kill you.  Over the weekend a picture showed what was claimed to be a person in a radiation suit installing 5G equipment. The picture was of a painter in a chemical suit painting a cell station green to fit into the local environment.  That was a little more benign than the claims that 5G killed birds in Brussels (when a 5G project was not happening).

The New York Times said such stories are starting to catch on.

However, RT America was identified as a principal meddler in the 2016 presidential election. Now, it is linking 5G signals to brain cancer, infertility, autism, heart tumours and Alzheimer’s disease.

The Times thinks that Russia’s president, Vladimir Putin is doing his best to stoke the fears of American viewers to get their government to ban 5G development.

He has no problems with the technology, seeing it as important for the same reasons as the US government

“We need to look forward. The challenge for the upcoming years is to organise universal access to high-speed internet, to start operation of the fifth-generation communication systems.”

New Knowledge, chief operating officer Ryan Fox claims that the Russians are using fake news as a economic warfare. His outfit tracks disinformation and thinks that Russia doesn’t have a good 5G play, so it tries to undermine and discredit Western efforts.

It is not helped that 5G is also a growing point of friction between Washington and Beijing, with each side lining up allies in what has become a significant technology race.

Fianna Strategies consultant, who also tracks disinformation,  Molly McKew, said that the Kremlin “would enjoy getting democratic governments tied up in fights over 5G’s environmental and health hazards”.

RT America has run seven stories on 5G. Its latest on April 14, reported that children exposed to signals from 5G cellphone towers would suffer cancer, nosebleeds and learning disabilities.

Hundreds of blogs and websites appear to be picking up the network’s 5G alarms, seldom if ever noting the Russian origins.

Anna Belkina, RT’s head of communications in Moscow, defended the network’s coverage of 5G. Unlike many other media, she claimed it shows the breadth of debate. When asked if the station’s stance conflicted with what Putin was saying about 5G she said that said the US network focused on local 5G issues, not “the roll-out in Russia”.

“Our American audience expects us to bring American concerns to the front, first and foremost”, Belkina said.

However, the coverage is deliberately manipulative. All mobile phones use radio waves, yet RT America refers to the signals as “radiations,” seemingly associating them with the powerful rays at the far end of the electromagnetic spectrum, such as X-rays and ultraviolet rays, which in high doses can damage DNA and cause cancer.

But the radio waves used in mobiles lie at the opposite end of the spectrum -- while higher than those of the past.

Opponents of 5G claim the technology’s high frequencies will make the new phones and cell towers extraordinarily harmful. “The higher the frequency, the more dangerous it is to living organisms”, an RT reporter told viewers recently.

That is absolute bollocks according to the boffins. The higher the radio frequency, the less it penetrates human skin, lowering exposure of the body’s internal organs, including the brain.

Dr Marvin Ziskin, a medical doctor and emeritus professor of radiology and medical physics at the Temple University School of Medicine said that 5G emissions, if anything, should be safer than previous generations.

But facts don’t matter anymore. The Russian troll network feeds a conspiracy-oriented ecosystem where truth does not matter.

Last modified on 13 May 2019
Rate this item
(24 votes)
Tagged under
More in this category: « Boffins wage data war on Farage Liu Young likely to replace Terry Gou as Foxconn zookeeper »
back to top