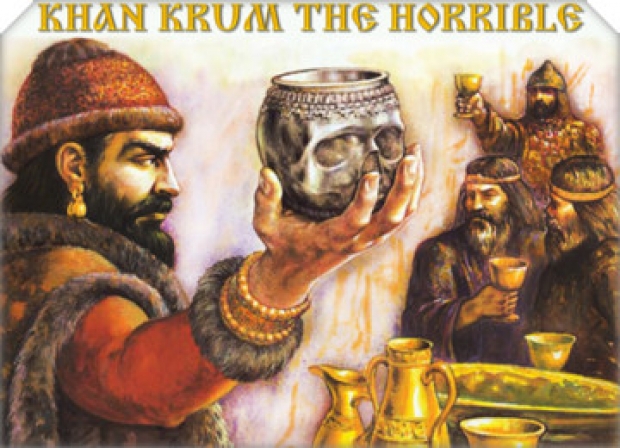 Ghost of Krum the Horrible stirs

Russia has turned on one of its most subservient cold-war allies after the country decided to purchase of new F-16 fighter jets from the United States.

During the Cold War, Bulgaria supplied rather attractive spies and Apple clones for its Russian overlords, but since the fall of communism, its involvement with Russia extends only to "businessmen" who patrol the streets in black Mercedes jeeps.   Now it seems that President Putin has unleashed his hackers on the nation whose ruler King Krum terrified the Byzantines and once drank wine from the skull of one of their emperors.

Hackers stole thousands of Bulgarians’ financial data and distributed it from a Russian-based email.

“Maybe this is the first case in Bulgaria which is successful, and a lot of personal data has been stolen”, Marinov told local bTV channel.

He said the cyber attack was probably motivated by Bulgaria’s move to buy eight new Lockheed Martin F-16 fighters for $1.256 billion from the United States, its most significant military purchase since the end of communism.

“A political analysis can also be made - the email comes from a Russian site ... and a crucial decision to buy the F-16s aircraft was made yesterday”, Marinov said.

Bulgaria has joined the European Union and trans-Atlantic NATO alliance in the last decade and is replacing its aging Soviet-made MiG-29 planes with the F-16s.

A leading Bulgarian newspaper, 24 Chasa, said one file emailed by the hackers had more than 1.1 million identification numbers with income, social security, and healthcare figures.

According to local web site Mediapool, the email came from an address with Russian mail provider Yandex.

Bulgarian media said the hackers’ email included an appeal for the release of WikiLeaks founder Julian Assange. “Your government is mentally retarded. The state of your cyber-security is a parody”, reports quoted it as saying.

In a statement, the NRA said it and security agencies were checking “a potential weakness” in its computer systems.

Last modified on 16 July 2019
Rate this item
(1 Vote)
Tagged under
More in this category: « AI is a computer power bugbear Frank Azor joins AMD as chief architect of gaming solutions »
back to top