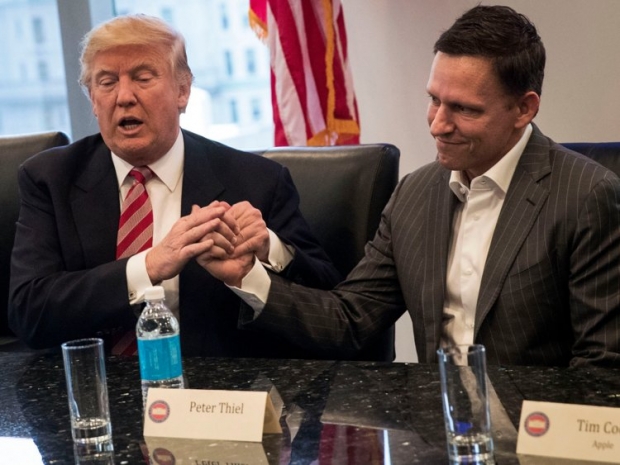 Apple’s favourite newspaper, the New York Times, has published anti-Google rants from those who represent Facebook.

While it looked like a rant from billionaire Peter Thiel might have appeared an amusing read, the Times failed to mention that he sits on the board of Facebook, one of Google's most significant competitors.

Thiel first blasted Google as "treasonous" saying that the FBI and CIA should investigate the company for working with the Chinese government. The tech investor asked if Chinese spies had infiltrated Google without actually standing up the claim.

Thiel has now followed up his anti-Google remarks in a new piece for the Times praising President Donald Trump and railing against "globalisation".

Thiel's argument is that anyone helping China to develop artificial intelligence technologies is assisting China's military because he says, all AI is all about military applications.

He said that people should “forget the sci-fi fantasy; what is powerful about actually existing A.I. is its application to relatively mundane tasks like computer vision and data analysis. Though less uncanny than Frankenstein's monster, these tools are nevertheless valuable to any army -- to gain an intelligence advantage to penetrate defences in the new theatre of cyberwarfare, where we are already living amid the equivalent of a multinational shooting war".

In 2017 Thiel sold the majority of his Facebook shares but remained on its board of directors.  He claims Google was "naive" for opening an AI lab in China while deciding not to renew a contract for its work on Project Maven, a US military initiative for which the company was developing an AI system to analyse drone footage, following employee backlash.

Thiel acknowledges that AI can be used for civilian purposes, but it doesn't matter.

"A.I.'s military power is the simple reason that the recent behaviour of America's leading software company, Google -- starting an A.I. lab in China while ending an A.I. contract with the Pentagon -- is shocking. As President Barack Obama's defence secretary Ash Carter pointed out last month, 'If you're working in China, you don't know whether you're working on a project for the military or not.'"

He said: "How can Google use the rhetoric of 'borderless' benefits to justify working with the country whose 'Great Firewall' has imposed a border on the internet itself? This way of thinking works only inside Google's cosseted Northern California campus, quite distinct from the world outside. The Silicon Valley attitude sometimes called 'cosmopolitanism' is probably better understood as an extreme strain of parochialism, that of wealthy enclaves isolated from the problems of other places -- and incurious about them."

But if you see Thiel as a Facebook board member, it casts the rant as a little partisan.  Facebook also uses AI technology, and no one has accused it of working for the military.

Last modified on 05 August 2019
Rate this item
(2 votes)
Tagged under
More in this category: « Saudi Arabia using Facebook to get regional influence US buys IBM’s supercomputer in a box »
back to top