Apple has another design stuff up 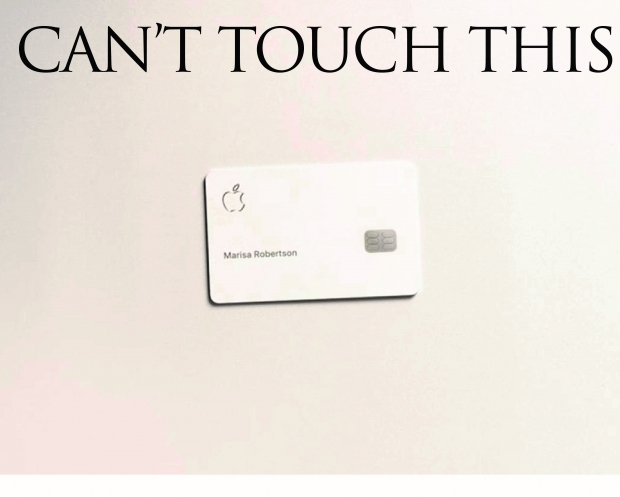 A credit card you can’t put in your wallet – whatever next? a clock which can't tell the time?

Apple’s design experts have outdone themselves by creating a credit card which cannot be put in a wallet or your jeans pocket.

Red-faced Apple has told those who are dumb enough to put their finances in its hands that they cannot put the card in a leather wallet or in the pocket of a pair of jeans or else it could cause "permanent discolouration".

The Apple Card is a relatively plain matte white credit card made of titanium, which was designed to stand out against other credit cards. But it turns out that it stands out because it is more brittle than glass. Odd really, when you think that something is made of titanium you have an image in your head of something being really strong. Looks like Apple has killed that symbol.

It is so bad that Apple has had to issue a guide advising customers how to "safely store and carry" their Apple Card.

The guide warns that storing the card with other credit cards can scratch and damage it.  Apparently, if an Apple card touches another credit card, it suddenly realises how rubbish it is, starts to sulk and self harm.

“If two credit cards are placed in the same slot, your card could become scratched. Don't place or store your titanium Apple Card card near magnets. If your card is placed close to a magnetic latch on a purse or bag, the magnetic strip can become demagnetised”, Apple warns.

So how are you supposed to carry it?

Well, ideally it should be carried by a specially hired Apple employee who will carry the card with iGloves and announce to passers by that you are super-cool and about to use your Apple Titanium card.  Of course, this will cost you a bit.  It is best not to take the card anywhere and use the same methods that sane people use.

Last modified on 23 August 2019
Rate this item
(7 votes)
Tagged under
More in this category: « Newspaper claims iPhones are radioactive VMWare spends $4.8 billion on two companies »
back to top