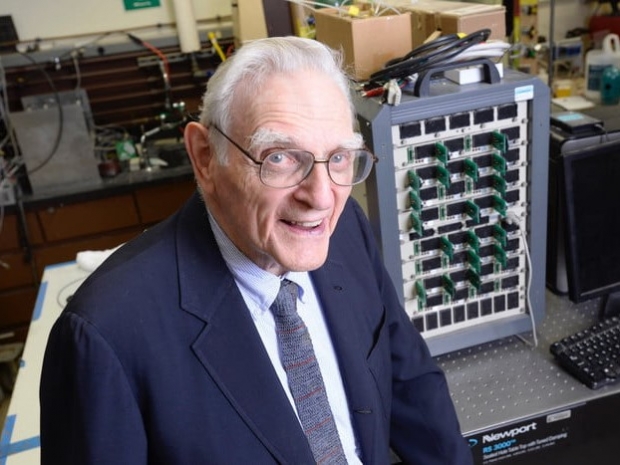 For ages, we have been writing about battery breakthroughs and yet none of them seems to appear in your smartphone.  However, a rapid-charging and non-flammable battery developed in part by 2019 Nobel Prize winner John Goodenough (pictured) has been licensed for development by the Canadian electric utility Hydro-Québec.

The cunning plan is to have the batteries ready for one or more commercial partners in two years.

Hydro-Québec, according to Karim Zaghib, general director of the utility’s Center of Excellence in Transportation Electrification and Energy Storage, has been commercializing patents with Goodenough’s parent institution, the University of Texas at Austin, for the past 25 years.

Goodenough and Maria Helena Braga, professor of engineering at the University of Porto in Portugal, developed a solid-state lithium rechargeable that used a glass doped with alkali metals as the battery’s electrolyte. The electrolyte is the material between cathode and anode and is often a liquid in today’s batteries, which typically means it’s also flammable and potentially vulnerable to battery fires.

Braga said her and Goodenough’s battery is high-capacity and charges in “minutes rather than hours”, performs well in both hot and cold weather, and that its solid-state electrolyte is not flammable.

“For the next two years we do research and development in order to prove the concept and to scale the materials”, Zaghib said.

Hydro-Québec’s research lab, which Zaghib says comprises 120 people, works with both early-stage technologies like the Goodenough glass battery and also with technologies already at commercial scale.

“This is one of the safest materials for lithium-ion today”, Zaghib said. “It’s used for electric buses and for energy storage.”

Beginning in 1996, Zaghib says, Goodenough and Hydro-Québec struck up a partnership to commercialize this lithium battery. Licensees of this technology include the now Chinese-owned A123 and the Japanese battery company Murata Manufacturing.