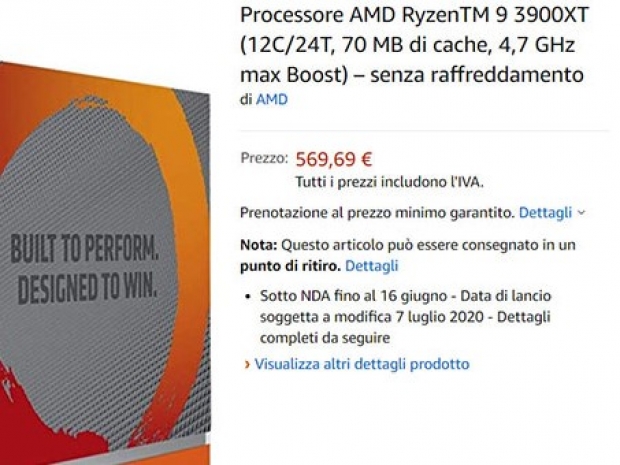 Over the weekend two 'Matisse Refresh' processors were found listed for pre-order on Amazon Italy.

The listings show price and a 7 July available date. The page adds that these processors are under NDA until 16 June.

The specs in the listing are as follows:

All this shows the Ryzen 3000X and 3000XT chips have the same cores/threads and cache, but faster boost clocks (100Mhz faster in both cases). Amazon does not tell us what the base clocks were but according to Hexus, the Ryzen 3000XT chips may simply be higher-binned parts but it is possible AMD has something else it is not telling us and we will find out tomorrow if that is the case.

The pricing doesn't look great for the small clock speed improvement. These Ryzen 3000XT CPUs are 30 percent more expensive (in Italy) than the processors upon which they are based upon, but that could just be Italy.

Last modified on 15 June 2020
Rate this item
(0 votes)
Tagged under
More in this category: « Jim Keller did his Intel job, moves out Computer can tell if a woman is faking an orgasm »
back to top