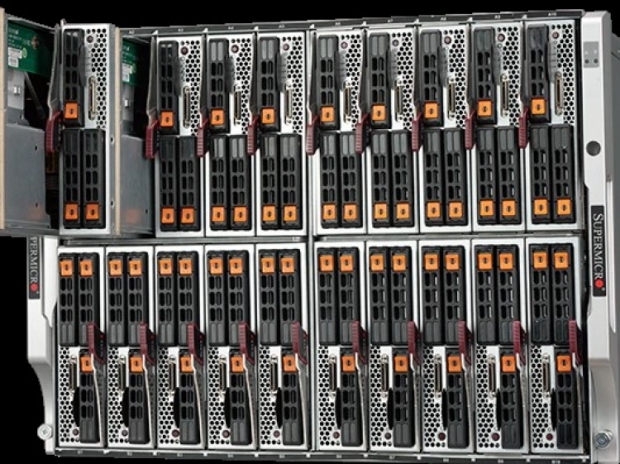 Super Micro said that the German Center for Scientific Computing (CSC) has chosen Supermicro’s 4U 8 GPU A+ server with PCI-E Gen 4 and 200Gb/s networking (AS -4124GS-TNR) as the foundation for their next generation of High-Performance Computing (HPC) servers.

For those not in the know, CSC is an initiative of the Frankfurt Institute for Advanced Studies, and Johann Wolfgang Goethe-Universität Frankfurt am Main.

The Supermicro AS-4124GS-TNR is an advanced state of the art server that incorporates AMD EPYC processors that have been designed to eliminate bottlenecks in the transfer of data between main host memory and the GPUs. When equipped with Radeon Instinct MI50 GPU accelerators, this server enables researchers to conduct their investigations exceptionally fast.

"Researchers can use  innovative new artificial intelligence (AI) solutions with these advanced features. Supermicro looks forward to a productive and mutually beneficial partnership with Goethe University.”

Goethe University Frankfurt hosts a supercomputer centre that serves a wide range of international scientists and researchers. A new and powerful supercomputer was needed to support researchers from varied disciplines who needed significantly increased processing capacity, it said.

The team assigned to architect and choose the new supercomputer investigated several server solutions that contained both CPUs and GPUs.

The chair for HPC architecture at Goethe University, Volker Lindenstruth said:” We have been able to collaborate with their technical engineers to describe our computational challenges and our potential bottlenecks based on previous generations of servers. Both Supermicro and AMD have responded with a balanced system that can easily be used by a wide range of scientists who require a scalable and optimised cluster of fast servers for their research. Especially the design that allows the integration of eight GPUs and up to two 200Gb/s connectivity network cards without any PCI Express switch provides clear advantages for application performance.”

The Goethe University Frankfurt supercomputing centre serves a diverse set of researchers and scientists. By using servers that contain state-of-the-art CPUs, GPUs, and networking, applications that range from particle physics to climate change simulations can be executed and accelerated on the AS -4124GS-TNR servers.

Additionally, requests have made for system time for computational chemistry applications, neutron star simulations, and lattice QCD investigations. All of these (and more) applications rely on the powerful performance of the AMD Radeon Instinct MI50 accelerators. Recently (mid-2020), Goethe University Frankfurt has been using HPC technologies to simulate the spread of the COVID-19 virus to understand how future pandemics spread could be prevented.

Goethe University Frankfurt ran several benchmarks to understand the performance of the AS -4124GS-TNR selected a server, the AS -4124GS-TNR, that contained both second generation AMD EPYC CPUs and AMD Radeon Instinct MI50 accelerators.

An even more relevant benchmark is how the system performs when running multiple independent jobs that use all the available cores. The purpose of this type of benchmark is to understand real-world use of a server and measure the performance of applications running concurrently.

Last modified on 30 June 2020
Rate this item
(1 Vote)
Tagged under
More in this category: « Phew. Philips Hue is a bridge too far The New York Times leaves Apple News »
back to top