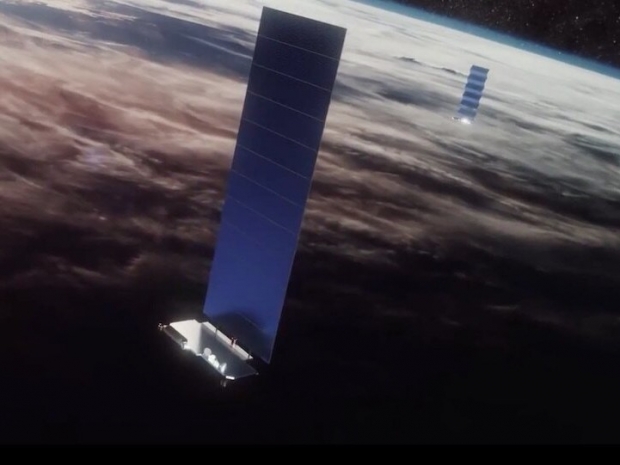 SpaceX's attempt to reduce the reflectivity of Starlink satellites is working, but not nearly enough to make astronomers happy.

For those who came in late, Starlink satellites are coated with an anti-reflective coating and are half as bright as the standard version.

However, while that is an improvement, it's still not good enough, according to the team, led by astronomer Takashi Horiuchi from the National Astronomical Observatory in Japan.

Apparently these "DarkSats" still cause problems at other wavelengths of light.

The scientists found that the albedo of DarkSat is about a half of that of STARLINK-1113 which is a decent improvement in the visual spectrum, but still not great. What's more, problems persist at other wavelengths.

"The darkening paint on DarkSat certainly halves reflection of sunlight compared to the ordinary Starlink satellites, but [the constellation's] negative impact on astronomical observations still remains", Horiuchi told Physics World. He said the mitigating effect is "good in the UV/optical region" of the spectrum, but "the black coating raises the surface temperature of DarkSat and affects intermediate infrared observations".

A third version of Starlink is supposed to be even dimmer. Called "VisorSats", they feature a sun visor that will "dim the satellites once they reach their operational altitude" according to Sky and Telescope. SpaceX launched some VisorSats last year, but the degree to which their albedo is lessened compared to the original version is still not known, or if these versions will exhibit elevated surface temperatures.

Horiuchi told Physics World that SpaceX should seriously consider lifting the altitude of the Starlink constellation to further reduce the brightness of these objects.

Last modified on 18 January 2021
Rate this item
(1 Vote)
Tagged under
More in this category: « Trump yanks Huawei suppliers licences US wasted $1.56 trillion on poor software »
back to top