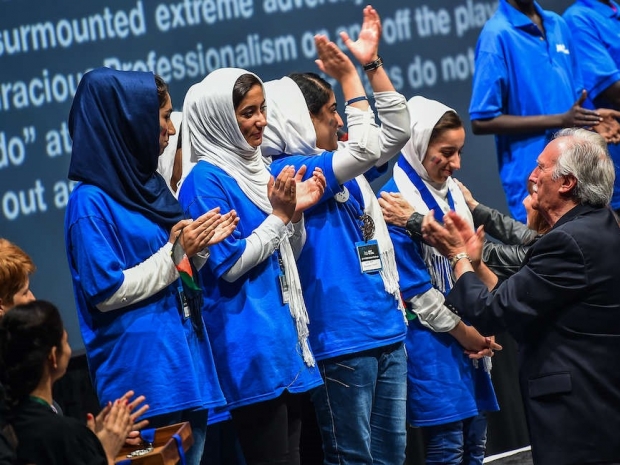 A renowned, female, robotics team has finally escaped Kabul for a new life in Doha as sexist misogynists who want to keep women illiterate take over Afghanistan.

For 17-year-old Ayda and 18-year-old Somaya struggled to escape from Kabul despite their high tech skills.

The girls managed to get on a flight organised by Qatar's government, flying to Doha alongside seven other team members, all without their families.

The Afghan Dreamers - as the team became known - were part enrolled in programmes organised by the team's parent organization, the Digital Citizens Fund (DCF).

The teens aged 15 to 19 - have set their sights on a new goal: the First Global Challenge, an Olympics-style international robotics competition that runs virtually for 12 weeks. The team members in Doha say they are already hard at work.

"We built a UVC [ultraviolet] robot that's like a sanitiser. It kills viruses, germs, and microbes from hospitals or offices", Ayda explained. "We're also going to build a CubeSat that sends information about space conditions to earth."

The irony is that super talented kids with these sorts of tech abilities which Afghanistan desperately needs if it is going to do anything other than illegally make opium are fleeing the country because its leaders think that they are just meant to produce their children.

The team became celebrities in the US after meeting US senators. A painting of the team even adorned one of the walls outside the now-abandoned US embassy in Kabul.

In the short term, the girls plan to remain in Doha. This week, the Qatar Foundation and Qatar Fund for Development announced that they'd be funding scholarships to finish their high school at 'Education City' in Qatar.

After that, both girls plan to apply to study artificial intelligence and robotics at university either in Qatar or abroad, before setting out on their own.

So far, the new Taliban government in Afghanistan - which has sought to present a moderate image to the international community - has said that women will be allowed to attend university provided they fall within the group's interpretation of Islamic law.

Last modified on 10 September 2021
Rate this item
(0 votes)
Tagged under
More in this category: « Gates blasted as office bully, and party animal Yandex claims to have seen off the world's largest DDoS »
back to top