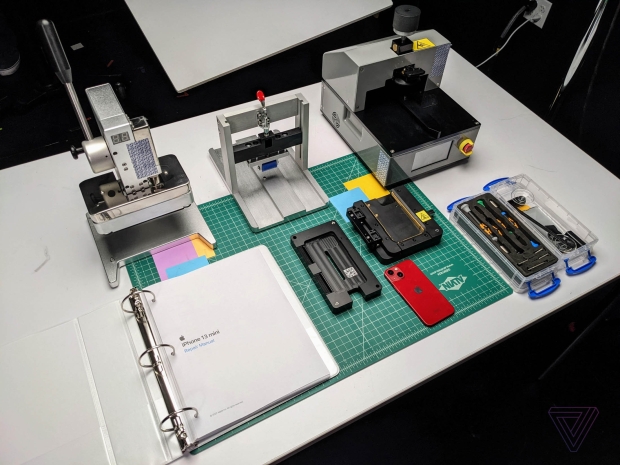 79 pounds of tools to fix a battery

When Apple agreed to create DIY repair kits there were some of us who thought the outfit’s heart may not be in it.

We expected that Jobs Mob would make using the kit such an effort that Apple fanboys would consider it too hard and give up. Apple would then say that no one was interested in Self Repair and wind the operation down

Practically it works like this, Apple insists that the job is done using its own tools. So it sends users all the tools it thinks they will need to do the job and then they have to send it back.

While this may not sound so bad to replace an Apple battery, Jobs Mob sends you two huge tool boxes in two giant Pelican cases. To be fair Apple is paying to send them both ways but it does make the entire operation look incredibly daunting.

Even the Verge, which is rather too fond of praising Apple for its own good, thinks the whole idea is rubbish but it offers Apple a way out as the writer claimed he was “having fun.”

“The single most frustrating part of this process, after using Apple’s genuine parts and Apple’s genuine tools, was that my iPhone didn’t recognise the genuine battery as genuine. “Unknown Part,” flashed a warning.

Apparently, that’s the case for almost all of these parts: you’re expected to dial up Apple’s third-party logistics company after the repair so they can validate the part for you. That’s a process that involves having an entirely separate computer and a Wi-Fi connection since you have to reboot your iPhone into diagnostics mode and give the company remote control.

The writer admits that this defeats a bunch of the reasons you’d repair your own device at home.

Finally, the writer realised that if he did not have to write an article on the repair kit he would have given up mostly because of how much the entire operation cost.

There was $69 for a new battery — the same price the Apple Store charges for a battery replacement, except here the user has to do all the work and assume all the risk. There was $49 to rent Apple’s tools for a week, more than wiping out any refund for returning the old used part and a $1,200 credit card hold for the toolkit

“Let’s be clear: this is a ridiculous amount of risk for the average person who just wants to put a new battery in their phone. And it’s frankly weird for Apple to insist on you covering the full value of the tools.“

So it looks like Apple’s plan will work then.

Last modified on 25 May 2022
Rate this item
(1 Vote)
Tagged under
More in this category: « DuckDuckGo is not as discrete as you might think Boffins worry that smartphones stuff up your mental health »
back to top