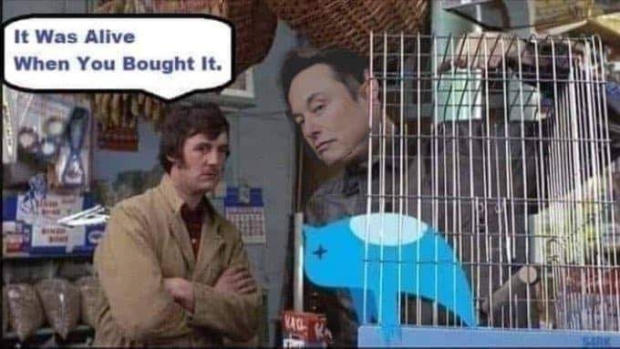 Easier than blaming himself

Supreme Twit, Elon [Look at me] Musk is blaming Apple for delays to his revamped Norwegian Blue subscription.

Musk initially insisted that his staff burn all-nighters to get the Blue subscription working by Tuesday, but now it looks like it will be delayed.

Rather than admitting that he set his objectives all wrong and fired staff he needed to keep during his ham-fisted take-over, Musk is blaming the delay on Apple taking a third of his profits if he tries to sell the subscription on its App store.

Over the course of this month, Musk has ramped up his tweets targeting Apple. On 18 November, he criticised the App Store’s cut by calling it a “hidden 30% tax on the Internet.”  On Monday, he claimed that Apple, reportedly one of Twitter’s biggest advertisers, has “mostly” stopped advertising on the social network and that it has “threatened to withhold Twitter from its App Store, but won’t tell us why.”

Logic suggests that Apple does not want to be associated with the basket of deplorables and hater that Musk insists are given a voice on his site. But the attack on Apple's App store policy is just silly.

While Apple’s app store antics have been widely known and are subject to more than a few anti-trust investigations, it seems strange that Musk seems to be suddenly focused on Jobs’ Mob as the cause of all his woes.  It is not as if when he bought Twitter for $40 billion, he did not know that Apple, a big seller of Twitter, wanted a third of his takings.

The Tame Apple Press has suggested that decisions to bring back suspended accounts and former President Donald Trump could put Twitter at odds with App Store policies.  But whatever the reason for not being on the App store, there are other reasons for the delay in the blue subscription account service. That is almost certainly because the code still needs to be fixed. This can only be because Musk set unrealistic targets for his developers and, like many managers, is trying to blame someone else when their autocracy fails to pay off.

Last modified on 30 November 2022
Rate this item
(3 votes)
Tagged under
More in this category: « Samsung working on a self-repair app Acer releases firmware update »
back to top