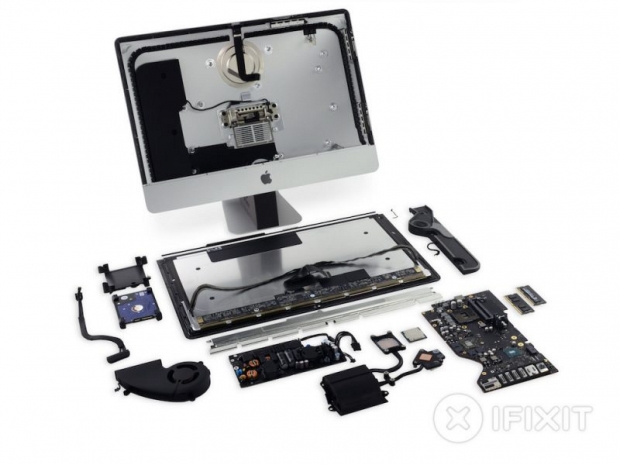 A new iFixit teardown has revealed that Apple's new 4K 21.5-inch iMac has both removable RAM and a Kaby Lake processor that's not soldered onto the logic board.

After slicing through the adhesive that secures the 4K display to the iMac's housing and removing the power supply, hard drive, and fan, iFixit discovered that the memory modules were not soldered onto the logic board like previous models, but instead sit in two removable SO-DIMM slots.

"It may not be as accessible as the (dead simple) RAM hatch found in the 27" iMacs—but still, this is a major win for upgradability over all the 21.5" iMacs with soldered RAM that we've encountered in recent years," the outfit said.

After detaching the heatsink and removing the warranty voiding stickers on the backside of the logic board, iFixit found that the Intel SR32W Core i5-7400 Kaby Lake processor sits in a standard LGA 1151 CPU socket, making it possible to replace or upgrade the CPU without a reflow station.

Last modified on 09 June 2017
Rate this item
(0 votes)
Tagged under
More in this category: « Apple refreshes MacBook lineup with Kaby Lake Razer updates its Blade Stealth notebook »
back to top