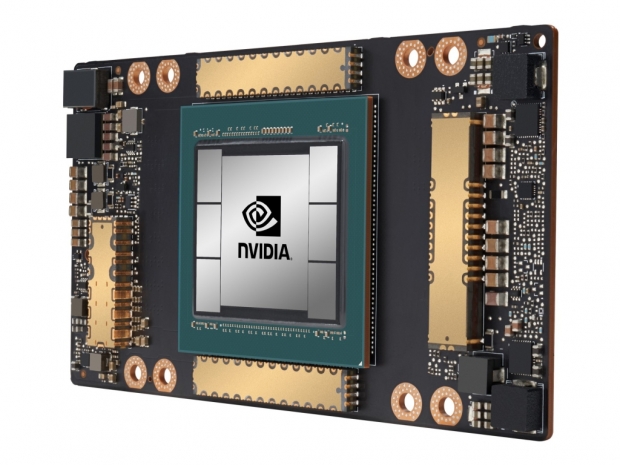 The focus of the GTC 2020 was Nvidia's new A100 Tensor Core GPU, which is based on the new Ampere architecture GA100 GPU, and will be a part of Nvidia's new DGX A100 AI system. As a direct successor of the V100 accelerator, the A100 will bring both significant compute performance improvements and new features.

The A100 Tensor Core GPU is a compute beast

The story of the day is the A100 GPU accelerator, or as Nvidia calls it, the A100 Tensor Core GPU. Designed as a successor to the V100, the Ampere-based A100 GPU brings several new features and delivers significantly higher performance in HPC, AI, and data analytics workloads.

According to Nvidia, it also provides strong scaling for GPU compute and AI deep learning (DL) applications both in single- and multi-GPU workstations, servers, clusters, cloud data centers, systems at the edge, and supercomputers.

With this in mind, it also comes with 432 3rd generation Tensor Cores, as well as features 5 HBM2 stacks and 10 512-bit memory controllers, leaving it with 40GB of 1215MHz DDR HBM2 and 5120-bit memory interface for a total of 1.6TB/s of memory bandwidth.

The Nvidia A100 comes in SXM4 board form factor and has a TDP of 400W, as well as has the third-generation of NVIDIA high-speed NVLink interconnect with a total of 12 links, leaving it with 600GB/s of total bandwidth, doubling it compared to V100. The A100 also supports PCI Express Gen 4, offering 31.5 GB/sec.

When it comes to compute performance, the A100 does not bring significant improvements in single-precision performance (FP32), peaking at 19.5 TFLOPs, which is not far from 15.7 TFLOPs on the V100, and the double-precision (FP64) compute peaks at 9.7 TFLOPs (7.8 TFLOPs for the V100), but this is where Tensor cores come in. 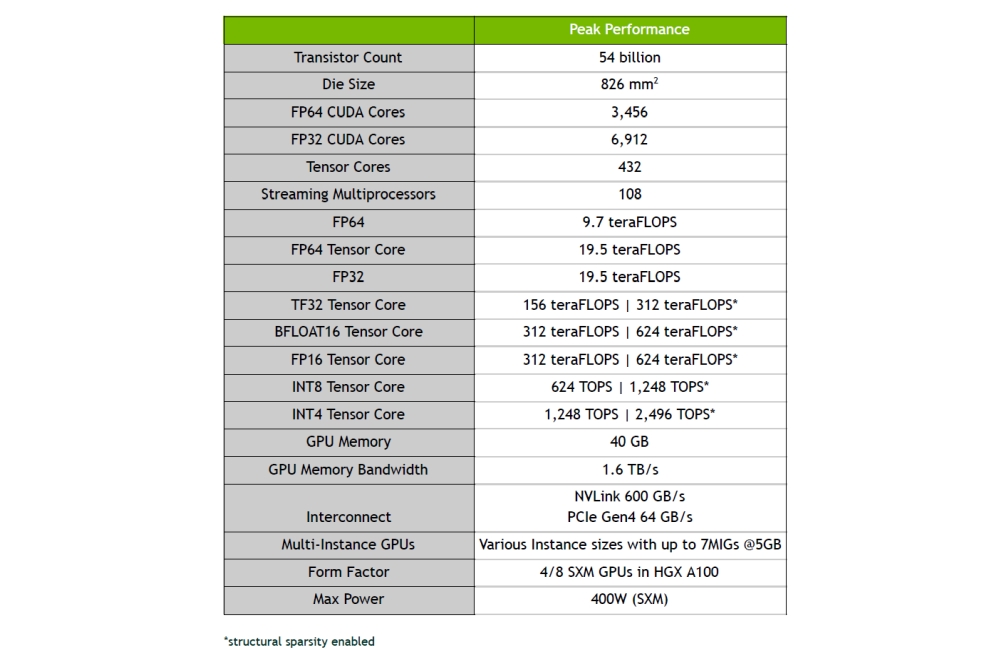 Tensor Cores are what matters

Plenty of other improvements, including the Multi-Instance GPU (MIG)

In addition to new architecture improvements, 3rd gen Tensor Cores, more VRAM, large L1 and 40MB of L2 cache, all leading to an impressive compute performance uplift, the A100 GPU will bring several other improvements, like the new Multi-Instance GPU (MIG) feature, which allows the A100 Tensor Core GPU to be securely partitioned into as many as seven separate GPU Instances for CUDA applications.

With MIG, each of those instance's processors have separate and isolated paths through the entire memory system, as well as uniquely assigned on-chip crossbar ports, L2 cache banks, memory controllers, and DRAM address busses. This allows better utilization of the GPU hardware while isolating different clients, like VMs, containers, and processes. 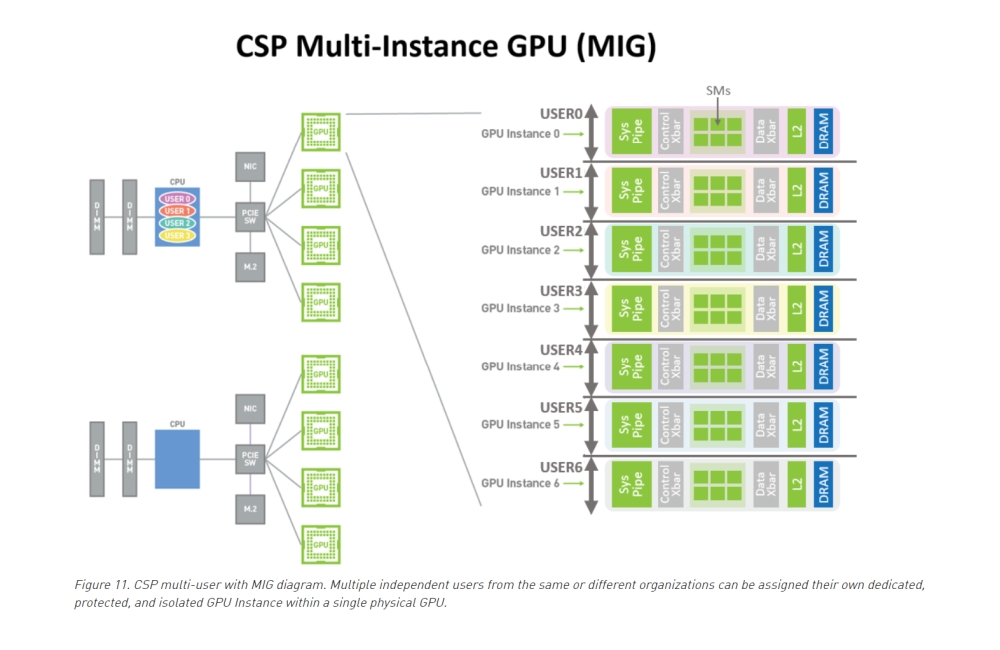 The Nvidia DGX A100, which should be immediately available and shipping worldwide, with the first customer being the U.S. Department of Energy’s (DOE) Argonne National Laboratory, starts at $199,000. It will be available through NVIDIA Partner Network resellers worldwide. 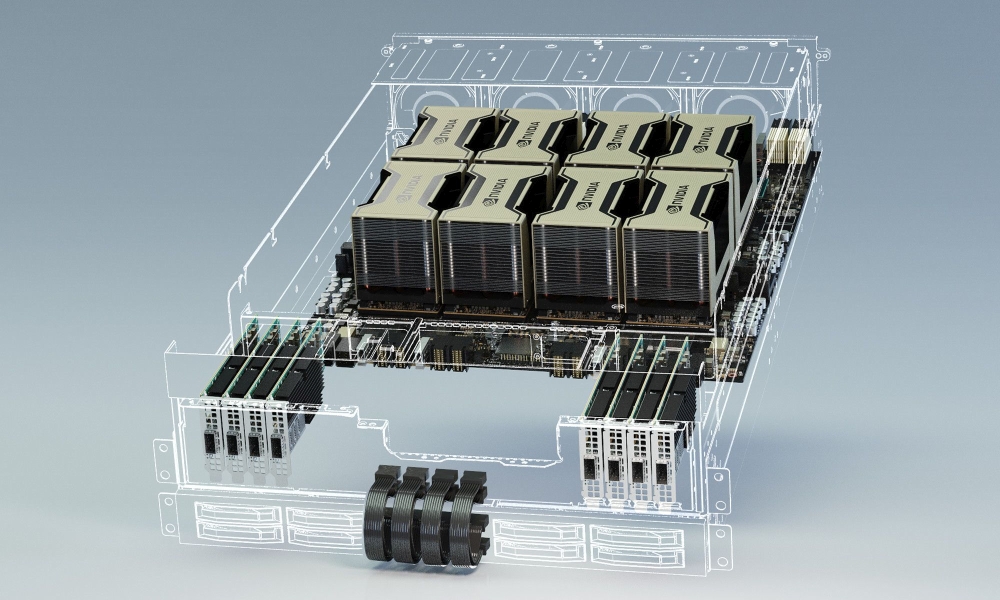 Last modified on 15 May 2020
Rate this item
(0 votes)
Tagged under
More in this category: « Nvidia officially unveils the Ampere-based GA100 GPU Nvidia DGX A100 AI System runs on AMD EPYC Rome CPU »
back to top