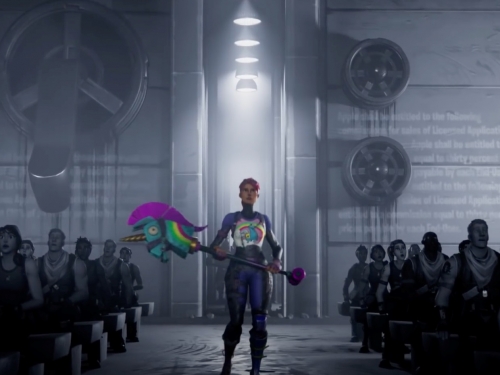 Fruity cargo cult Apple has lost its attempt to cause huge problems for the gaming industry because Epic Games stood up to it.

For those who came in late, Epic started a fight with Apple over its app store antics. This resulted in Apple kicking Epic out of the Walled Garden of Delights.  But Apple went one step further and terminated the developer account used to support Epic’s Unreal Engine.

Epic took Apple to court and won a temporary restraining order against Apple — at least in part. Effective immediately, Apple can’t retaliate against the company by terminating the developer account used to support the company’s Unreal Engine. But in the same ruling, Judge Yvonne Gonzalez Rogers decided that Apple will not be required to bring Fortnite — which it had banned after Epic added an in-app payment system in violation of Apple’s rules — back to the App Store.

The Judge said that Epic “strategically chose to breach its agreements with Apple and had not yet demonstrated irreparable harm. The current predicament appears of its own making... to disturb the status quo".

Rogers wrote that maintaining that status quo is also why she’s ruling that Apple can’t cut off access to the Unreal Engine right now. There, it was Apple who “has chosen to act severely” by impacting both third-party app developers, as well as Epic’s reputation, by threatening the Unreal Engine.

“Epic Games and Apple are at liberty to litigate against each other, but their dispute should not create havoc to bystanders”, Rogers wrote.

Rogers agrees with Epic that there is “potential significant damage to the Unreal Engine platform itself, and to the gaming industry generally” and suggested that Apple would have a hard time arguing that Epic won’t be harmed if Unreal Engine developers abandon their projects because Epic can no longer support them on Apple platforms.

The court hasn’t settled when it will hear arguments on the merits of Epic’s claims, but it is unlikely to be this year. Asked when they would be prepared to begin trial, Epic’s counsel said they could be prepared within four to six months. Apple suggested a longer discovery period, with the trial beginning in ten months.

More in this category: « It is still pretty cheap to bring down a company Amazon wants to build a quantum computer »
back to top