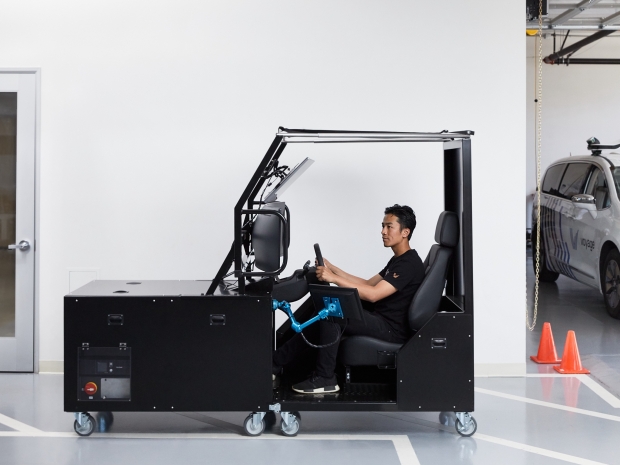 Designed to give instructions to a self-driving car.

Self-driving startup Voyage built a physical "Telessist Pod" with software that allows a remote operator to give instructions to a self-driving car.

Voyage CEO Oliver Cameron said that "For all of this to work safely, it had to basically be a car without wheels. It still needed a real steering wheel, pedals, automotive-grade connectors, and automotive-grade ECUs".

Voyage's engineers built a "car without wheels" because they wanted to mirror the experience of driving a real car as closely as possible.

"If you try to do it with a gaming steering wheel, you don't get the force feedback" you get with a real car, Cameron said. "It's impossible to drive reliably like that. It's so unsafe."

Remote Voyage drivers sit in a metal cage the size of a golf cart. There's a steering wheel, accelerator pedal, and brake pedal. A wraparound array of computer monitors shows the car's surroundings. An encrypted wireless data connection keeps the components in the Telessist pod synchronised with their counterparts in the real car. Voyage says the network latency is under 100 milliseconds -- short enough that the driver won't notice a significant lag.

In case something goes wrong, the company bonded together five separate mobile connections, each with its own SIM card on a different wireless carrier, to achieve maximum redundancy and hence reliability. If one of the five networks fails, software automatically switches over to the other four.

There's a system called Remote Drive Assist that will take over if the car loses its wireless connection. Voyage even added an emergency braking system, which consists of a small, self-contained lidar unit in front of Voyage's cars.

"If it detects an imminent collision, it has the power to activate the brakes and bring the vehicle to a stop,"

Last modified on 14 July 2020
Rate this item
(0 votes)
Tagged under
More in this category: « Hybrid drones open new opportunities for farmers BA mothballs its 747 fleet early »
back to top