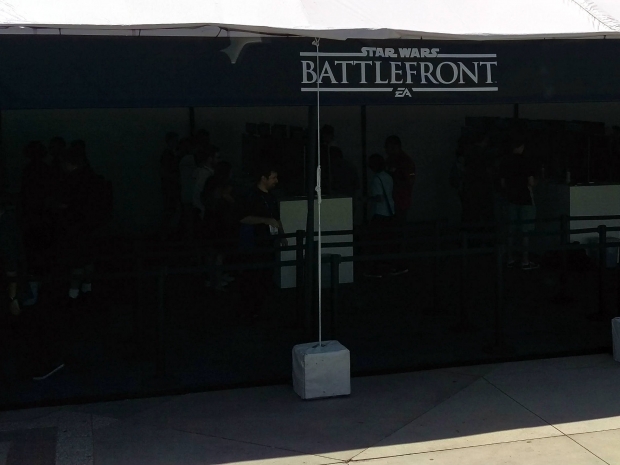 EA knows what it's doing

We had a chance to play Star Wars Battlefront PlayStation 4 edition. We saw a short demo of Battlefront on PC at the AMD Fury X, Radeon 300-series event, too.

There is no doubt that graphics on the PC version will be many times better, but let's not mix apples and oranges. The PlayStation 4 runs on semi-custom AMD Jaguar core and semi-custom GCN graphics that give a fraction of the performance you get from a current-gen high end graphics card.

AMD is being very smart for choosing to bundle this game with its latest generation cards, but this is not something the company wants to confirm at this time. Graphics cards like the Radeon Fury X or Nvidia's Geforce Titan X or similar will definitely offer much better graphics than consoles. EA and Dice took over development and you are looking at better than Battlefield 4 graphics for this title. We tried the PlayStation 4 and people from EA told us that we should be able to try the PC demo at the Comic Con International that starts in some two weeks in San Diego.

Everyone who liked Star Wars episodes 4, 5 and 6 will want to play these games as you get the play parts of the movies and the game looks quite astonishing thanks to the Frostbyte 3 engine.

Characters are well developed, as they borrowed them from the original movie franchise, which is definitely something that will help the cause. EA wants to sell nine to ten million copies of the game and with Star Wars Episode 7 coming at roughly the same time. they have a good chance.

Mickey Mouse powered Disney really knows what it is doing, and getting EA on board seems to be a marriage made in heaven. The Frostbyte engine provides excellent lifelike graphics, and in game characters and movement which gives us an idea that this is going to be the game to have when it comes out. The game will come out on November 17th and EA will let you preload it a few days earlier.

The PlayStation 4 version we tried and the co-op mode was about defending a position in mountains and killing some imperial troopers and staying alive. We got to play for more than a few minutes and we can say that we like it. The movements are realistic, graphics is good even at the PlayStation 4 version and we can imagine that it will be even better. From what we saw, the gameplay looks promising and there is no reason not to be excited about the game, as long as you are fan of Star Wars and FPS games. [Which includes 98.72% of geeks. Ed]

There were a bunch of Plastation 4 consoles loaded with the game at the show and we have to say that we wished to have a keyboard and a mouse, as this is the way we like to play. This will happen soon enough but we are sure that this game will help selling more GPUs.

Last modified on 22 June 2015
Rate this item
(5 votes)
Tagged under
More in this category: « EA/DICE Star Wars: Battlefront gets new trailers at E3 2015 Sony releases 1TB PS4 »
back to top