Nvidia is seriously gearing up for the Intel 4th generation Core Haswell launch as it has now officially announced four new mobile GPUs that will be a part of its GTX 700M series lineup, the GTX 780M, 770M, 765M and the GTX 760M.

All four new mobile GPUs are based on 28nm Kepler architecture and while GTX 780M is the only one based on the GK104 GPU with 1536 CUDA cores. The other three GPUs will be based on the GK106 GPU with 960 and 768 CUDA cores. The shere specifications of the GTX 780M are quite impressive and, according to Nvidia, should be enough to run all the latest game titles including Tomb Raider, Battlefield 3, Far Cry 3, Bioshock Infinite and Assassins CreeD III at 1920x1080 resolution and Ultra settings.

The GTX 765M is also based on the 28nm GK106 Kepler GPU but features 768 CUDA cores and works at 850MHz+ GPU clock and comes with 2GB of GDDR5 memory clocked at 4GHz and paired up with a 128-bit memory interface for 64GB/s of memory bandwidth. The last but not the least is the GTX 760M based on pretty much the same specs as the GTX 765M but with a slightly lower 657MHz+ GPU clock.

All four GPUs will feature Nvidia's GPU Boost 2.0 and support Nvidia Optimus graphics switching technology that worked flawlesly with Ivy Bridge CPUs and should also work flawlesy with new Haswell GPUs. According to Nvidia, the GTX 780M is the worlds fastest notebook GPU and currently we have to agree with them. The GTX 780M is up to 31 faster than the GTX 600M series GPU that it replaces while the GTX 770M and the GTX 760M are up to 55 and 30 percent faster than its predecessors. 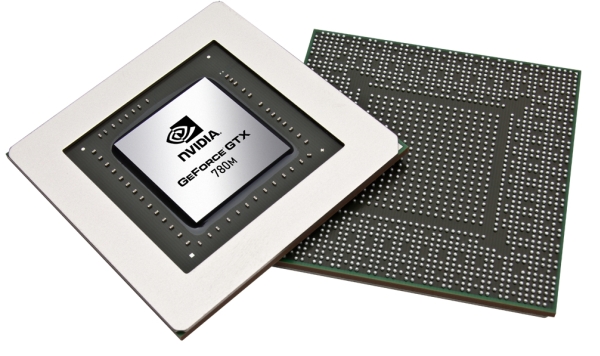 Last modified on 31 May 2013
Rate this item
(1 Vote)
Tagged under
More in this category: « MSI launches two GTX 770 graphics cards Point of View launches GTX 780 Ammo and Mag graphics cards »
back to top