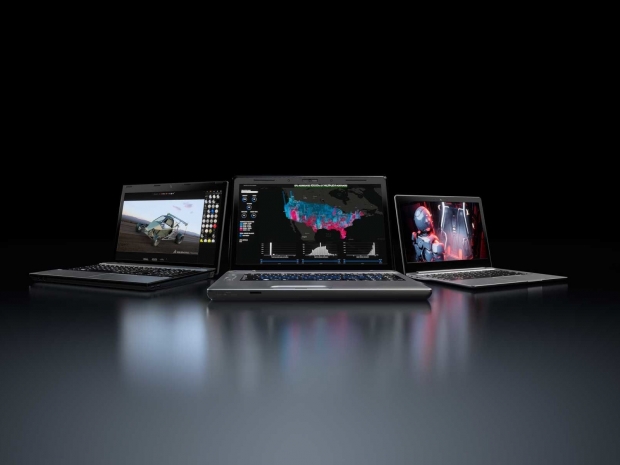 Can fit under the bonnet of a laptop

The graphics card maker named after a Roman vengeance Daemon, Nvidia has shrunk its Quadro RTX 5000 graphics hardware to fit it into a laptop.

Nvidia said that the new tech would have 3,072 CUDA cores and 48 RT cores, paired with 384 Tensor cores and 16GB GDDR6 RAM. This is the same as the version available for desktops, and the mobile edition is designed for professionals who do heavy graphics or video work while on the move.

There is not a lot of difference between the older and new models. The older version could manage 8.9 TFLOPS vs the new model's 9.4 TFLOPS. But the RTX is significantly more efficient. It can also handle ray tracing, which is very important if you want your ray traced.

At launch, there are 17 laptops, made by seven partner companies, that will carry the new Quadro GPUs, which will be branded under the "RTX Studio" name.

The company claimed that the machines will run up to seven times faster than the equivalent MacBook Pro with 32GB RAM and AMD's Pro Vega 20 GPU.

The "RTX Studio" comes with "Nvidia Studio Stack," a software suite of SDKs and APIs tailored to speed up video editing, rendering, and vector animation, among others. Nvidia says that software from Adobe, Autodesk, Avid, Blackmagic and Maxon has been extensively tested to ensure "the best performance and reliability." Game developers who use Unity and Unreal will get similar promises of speed and dependability.

RTX Studio laptops will be available at some point in June from ASUS, Dell, HP, MSI, Razer, Gigabyte and Acer. Obviously, pricing and specs will vary depending on region and manufacturer, but the company says that the cheapest models will cost no less than $1,600.

Last modified on 28 May 2019
Rate this item
(0 votes)
Tagged under
More in this category: « Navi is the Radeon RX 5700 Chipzilla claims its integrated graphics are better than AMDs »
back to top