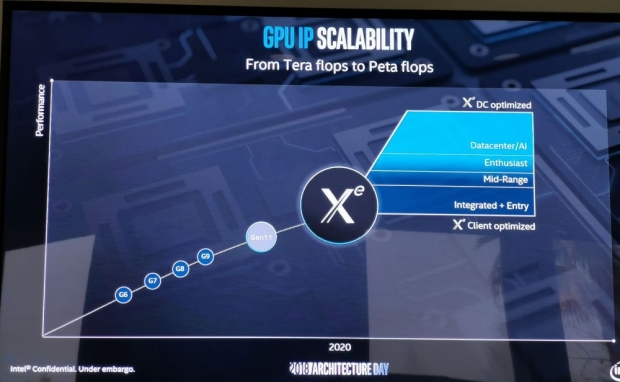 Intel’s CEO Bob Swan has provided the financial community an update on its good Q3 2019 financial performance and mentioned a few recent milestones. In this quarter, Q3 19, Intel achieved power on exit for the first discrete GPU.

When Bob said this quarter, he means Q3 is when the boot-up and power on happened.

Additionally, Bob said: "In Q3, we also shipped our first 10-nanometer Agilex FPGAs. And in 2020, we'll continue to expand our 10-nanometer portfolio with exciting new products including an AI Inference Accelerator, 5G base station SOC, Xeon CPUs for server storage, and network and a discrete GPU. This quarter, we've achieved power on exit for our first discrete GPU, DG1, an important milestone."

The 2020 launch frame was a timeframe that was always realistic to expect an Intel discrete graphics solution. Mid 2020 was timeframe we expected when Raja Koduri and Chris Hook joined Intel in late 2017. It takes time to make a discrete GPU from the ground up.

Chris Hook, Graphics and Visual Technologies Marketing Chief at Intel Corporation twitted It is alive, on its twitter account, well you can imagine that he means discrete GPU from Intel.

Ari Rauch, a Vice President at Intel Corporation for Graphics technologies and Products, also proudly twitted that the discrete GPU has power on. Ari is very realistic.

I’m so proud of our engineering teams for reaching the DG1 power on milestone. We still have a very long journey/odyssey ahead of us, but we’re now one important step closer.

Tape out in the past

In order to boot up the pre-production chip, the company has to go to the famous tape out process. Take out is the process when all the programming libraries come together, and the company makes the prototype chip, silicon. After that, in order to boot it up few things have to happen.

A semiconductor company has to package the chip and put it on a GPU mock-up board and marry it with some memory and a lot of resistors, power components, and wires. The next step is pugging that card into a system. The board and the DG1 chip have to have drivers and of course have to run on an operating system.

It is safe to assume that for the Intel CEO to stand up and say "we have power on the chip", some game or benchmark was running on Intel DG1 solution.

Based on decades of experience, if all goes well, Intel’s discrete graphics should be available for public within less than a year. Game on.