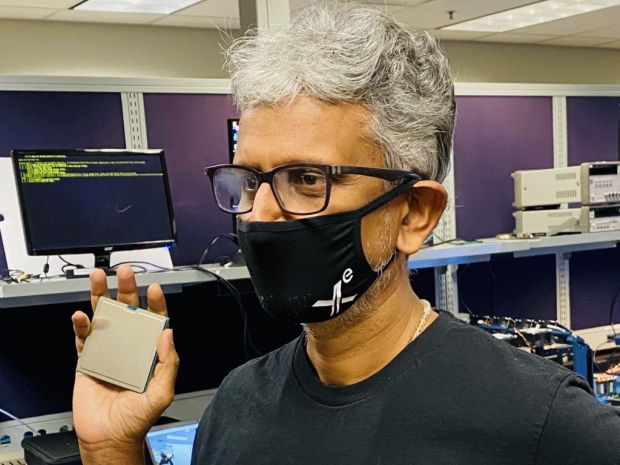 Intel employee Raja (King) Koduri has tickled our fancy with a tease previously pre-announced as Ponte Vecchio, Xe-HPC line of chips that will take a chiplet approach, and offer smaller and larger designs.

Raja Koduri, currently working at Intel as senior vice president, chief architect, and general manager of architecture, graphics, and software, has been teasing the Xe graphics lineup for some time now, and now we have two new pictures showing the chiplet approach in all its glory.

According to previous details, we are looking at three different Ponte Vecchio chips, compared to a standard 18650 battery.

In a separate Tweet, Raja also revealed a bit more information suggesting that he is holding a "peta ops " in his palm (almost!), which gives us a bit detail about the performance of the GPU, although, without further details, we are not sure if Raja is talking about INT8 or some other metric. Hopefully, we will hear more details soon.

Ponte Vecchio, as it is, won't be shipping until next year, and the first preview of the Xe graphics is expected in the consumer Tiger Lake platform, something that was teased earlier by Intel's Ryan Shrout.

Last modified on 25 June 2020
Rate this item
(1 Vote)
Tagged under
More in this category: « Nvidia engineer comes up with Vulkan graphics driver for the Raspberry Pi Tiger Lake's integrated graphics crushes Nvidia GPU »
back to top