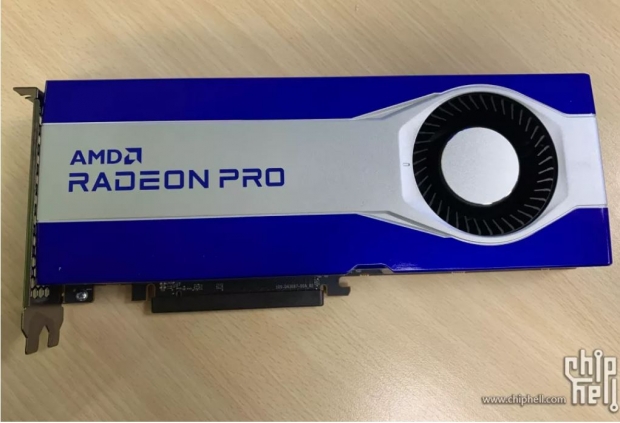 The truth is out there

An unidentified Radeon Pro graphics card has been spotted in China in the Chiphell forums and could be AMD's forthcoming Big Navi Radeon Pro.

The mysterious graphics card have a dual-slot design and a shroud with the characteristic blue and silver theme. With the silver stripe, it should be a Radeon Pro W-series card as opposed to a Radeon Pro WX-series model. However, the cooler itself doesn't resemble the existing designs on the Radeon Pro W5700 or W5500.

Tom’s Hardware thinks it is a safe bet to assume that the enigmatic graphics card may be a next-generation RDNA 2 Radeon Pro graphics card. The sticker clearly states that this particular unit is an engineering sample so the final design could be completely different.

The Chiphell forum user covered the serial number for obvious reasons, and the barcode is too small to decrypt.

AMD's Radeon Pro graphics card typically take after their mainstream counterparts. So far the chipmaker has released the Radeon RX 6900 XT, RX 6800 XT and RX 6700 XT so the graphics card in question is possibly based on one of the three launched models.

It looks like it has Samsung 16Gb memory but this does not give many clues the Radeon RX 6900 XT, RX 6800 XT and RX 6700 XT all employ Samsung 16 Gbps GDDR6 memory chips. There is also cryptic mention of "Full Secure TT GLXL A1 ASIC” which could mean anything.