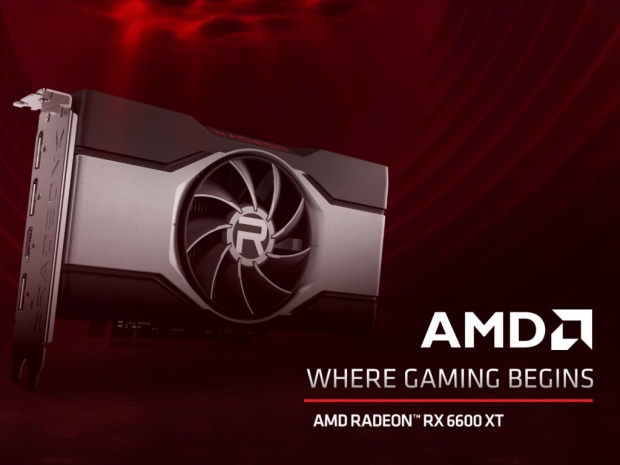 As noted, the Radeon RX 6600 XT is based on the 7nm Navi 23 GPU, with full 32 Compute Units (CUs), leaving it with 2,0478 Stream Processors. It comes with 32MB of Infinity Cache, and 8GB of 16Gbps GDDR6 memory on a 128-bit memory interface, which adds up to 256 GB/s of memory bandwidth. The lower memory bandwidth is probably why AMD is targeting the "high refresh rate 1080p gaming".

The GPU is clocked at up to 2359MHz Game clock, and it has a 160W TBP (Total Board Power), so needs a single 8-pin PCIe power connector. 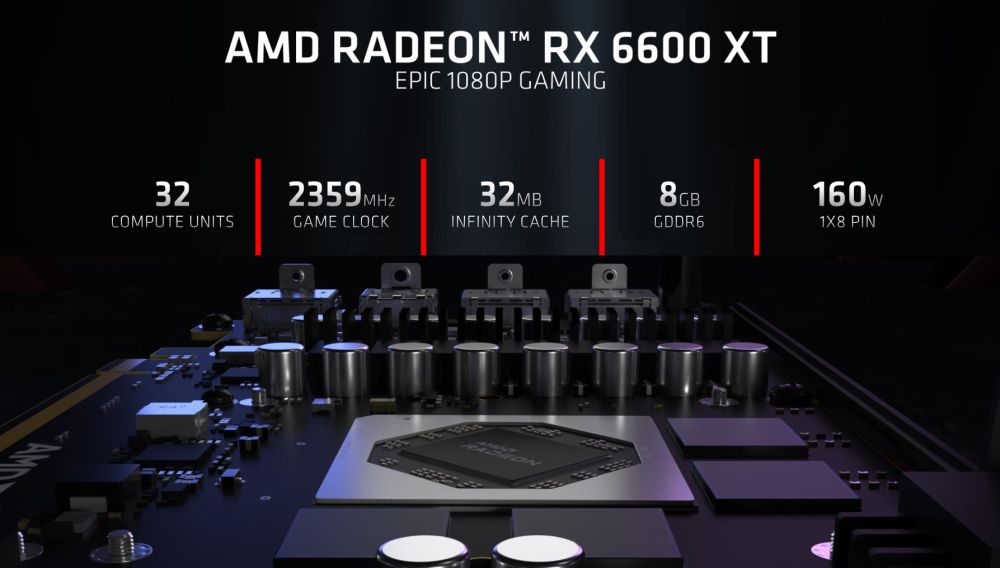 Performance-wise, the Radeon RX 6600 XT is, according to AMD, up to 2.5x faster compared to the Nvidia GTX 1060, which is not a bad result. AMD also compared the Radeon RX 6600 XT with the RTX 3060, and according to their own results, the RX 6600 XT is up to 15 percent faster on average at 1080p max settings across many AAA titles. Of course, it remains to be seen if these results include ray tracing or what settings were used so we'll wait for the final judgment when some reviews start to show up and we see how it fares across various games and what is the performance per buck and performance per Watt. 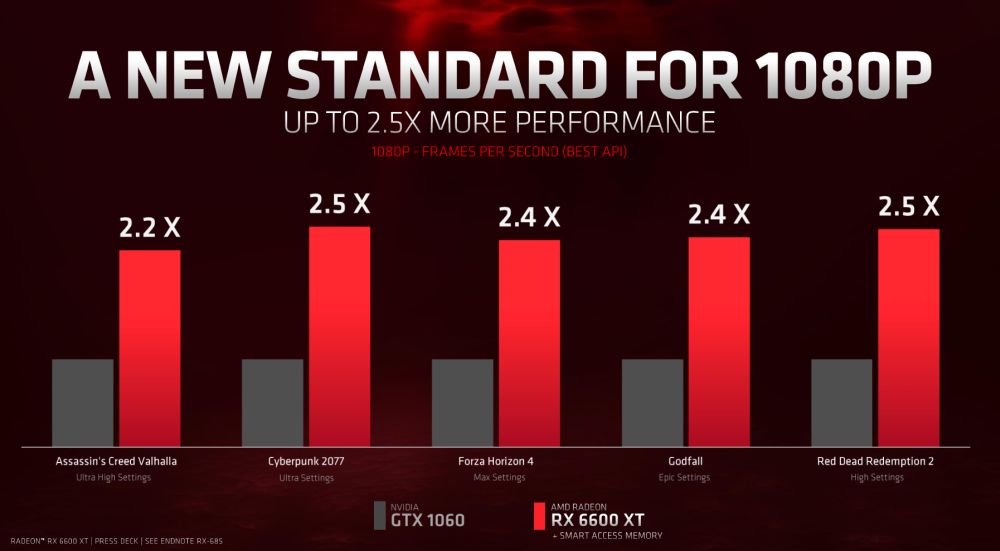 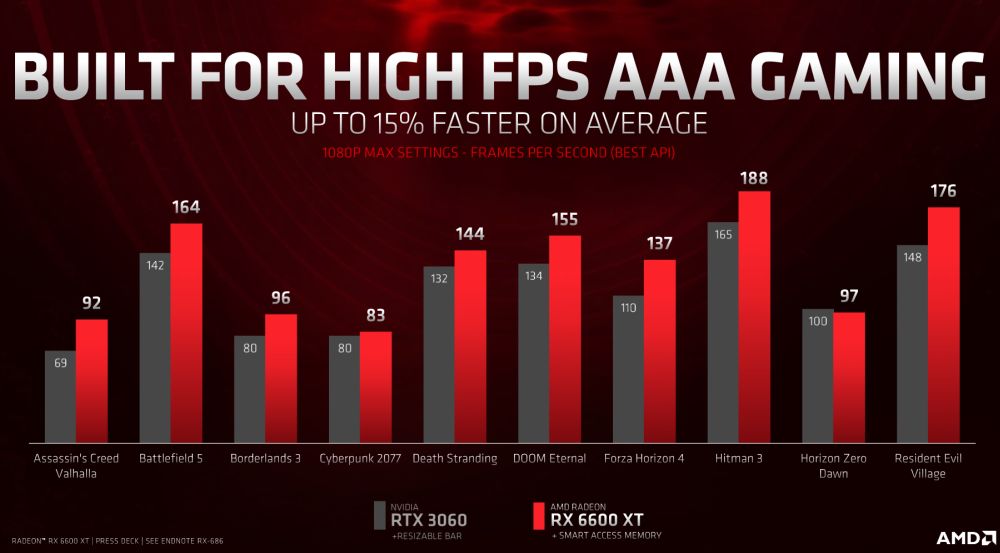 AMD also claims that two-thirds of shipped gaming displays last year were 1080p resolution, and these mid-range graphics cards were always the bread and butter as these are usually selling better and in much higher volume compared to the high-end graphics cards. AMD is betting hard on its Smart Access Memory as well, claiming it works much better than Nvidia's Resizable BAR, giving much higher performance gain, as well as provides big gain with FidelityFX Super Resolution. 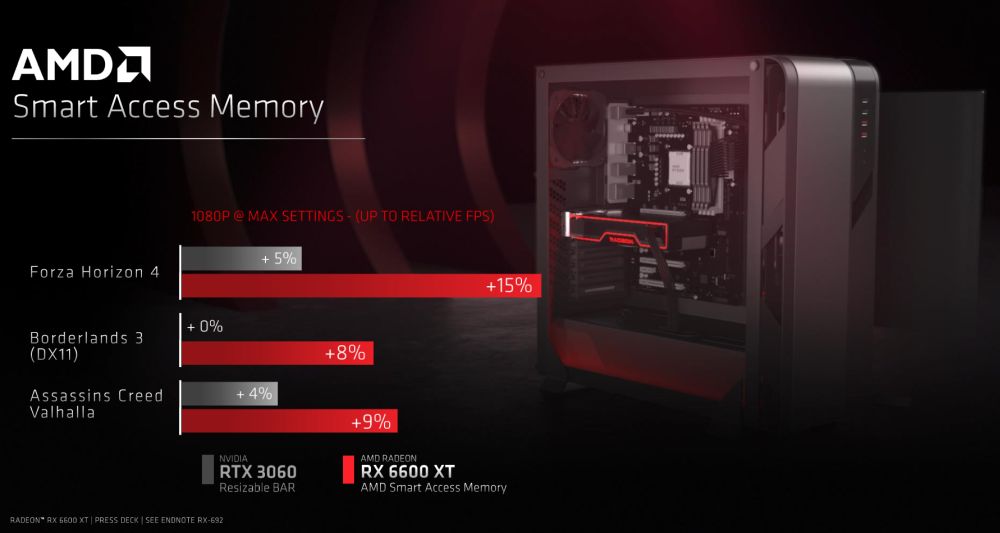 It appears that our sources were spot on as we wrote earlier that the Radeon RX 6600 XT will be launching on August 11th, and now we have a final piece of the puzzle, the MSRP. The suggested price is set at $379, but we doubt that there will be a lot of those available at that price, especially considering the state of the GPU market today.

Of course, all AMD AIB partners have already come up with their own custom designs, some of which will be priced higher, but hopefully, there will be plenty of stock once it hits the retail/e-tail market on August 11th.

The non-XT Radeon RX 6600 was not announced but hopefully, AMD did not postpone the launch as we were told it should be launching on August 11th as well.

Last modified on 03 August 2021
Rate this item
(4 votes)
Tagged under
More in this category: « AMD Radeon RX 6600 XT gets pictured 3dfx might be making a comeback »
back to top