Some AMD Radeon RX 6600 XT reviews are out 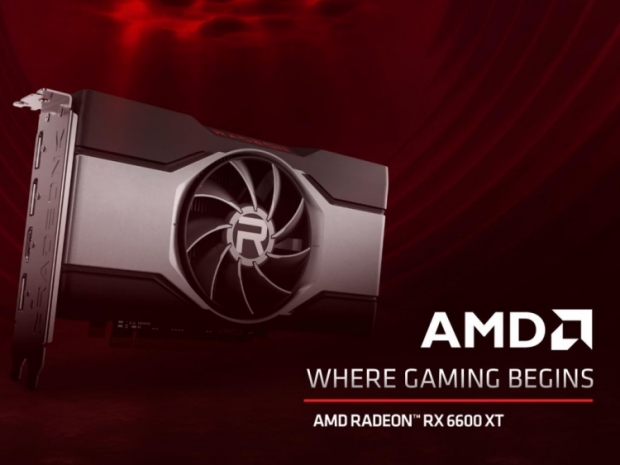 Some reviews for the new AMD Radeon RX 6600 XT graphics card have finally gone live and while the performance is solid, the high price tag (even MSRP) leaves a bitter aftertaste. Based on AMD's Navi 23 GPU, the RX 6600 XT packs 2048 Stream Processors and comes with 8GB of GDDR6 memory on a rather narrow 128-bit memory interface.

Andreas Schilling, a colleague from Hardwareluxx.de managed to get a quote from AMD, saying:"we will have plenty of cards on day one in the channel, enough that no eTailer will have NO reason to have inflated prices ...". This is pretty much in line with what we have heard earlier so hopefully, the situation will improve as currently, Amazon.de has a Gigabyte card listed at well over €1000, and Overclockers.co.uk should have quite a few custom cards ranging from £374.99 to £499.99, but we'll know for sure tomorrow.

On AMD board partner on availability of the Radeon RX 6600 XT:

"we will have plenty of cards on day one in the channel, enough that no eTailer will have NO reason to have inflated prices ..."

In case you missed it earlier, AMD is marketing the Radeon RX 6600 XT as "a perfect graphics card for "high refresh rate 1080p gaming". It is based on the 7nm Navi 23 GPU, with full 32 Compute Units (CUs), leaving it with 2,048 Stream Processors. It comes with 32MB of Infinity Cache, and 8GB of 16Gbps GDDR6 memory on a 128-bit memory interface, which adds up to 256 GB/s of memory bandwidth.

The GPU works at a 2359MHz base clock and it boosts up to 2589MHz, although some custom designs will push those clocks even higher.

As expected, the Navi 23 GPU is very energy efficient and the card has decent overclocking potential, and so far, there are several nice custom designs from usual AMD AIB partners, including Asus, Gigabyte, MSI, Sapphire, Powercolor, and others.

Here are some reviews from around the net.

Last modified on 11 August 2021
Rate this item
(3 votes)
Tagged under
More in this category: « Is ray tracing really worth it? Nvidia releases card for small form factor PCs »
back to top