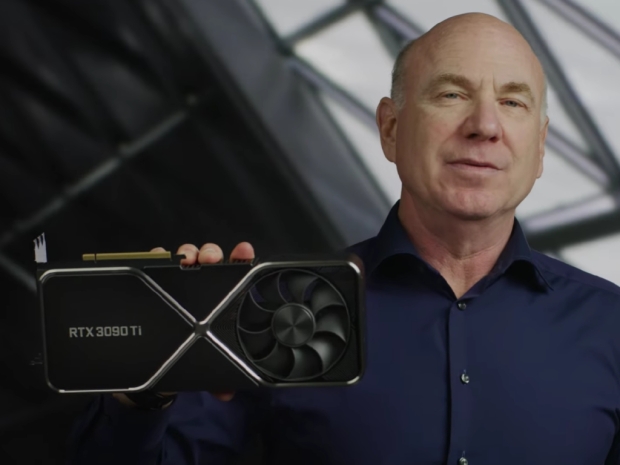 Nvidia's Senior VP, Jeff Fisher, kicked off the address talking about the gaming market, GPUs, and "revolutionary" architectures from Nvidia, with some impressive statistics. According to Nvidia, there 3 billion gamers and the gaming market is worth $300 billion, with the company being a big part of it, shipping 1.5 billion GPUs.

Geforce Now goes on TVs, gets BF4 and BF5, and more

Nvidia is also big on cloud gaming, which is expected to grow to 100m subscribers by 2024, and its Geforce Now is getting some new things.

According to Nvidia, there are currently 90 free-to-play games on Geforce Now, and BF4 and BF5 are also available on Geforce Now as of today. 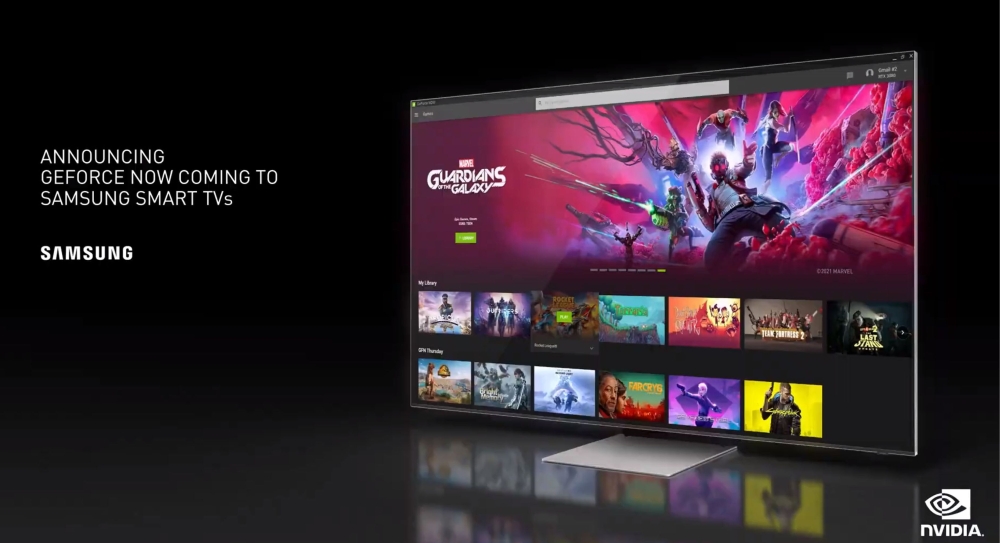 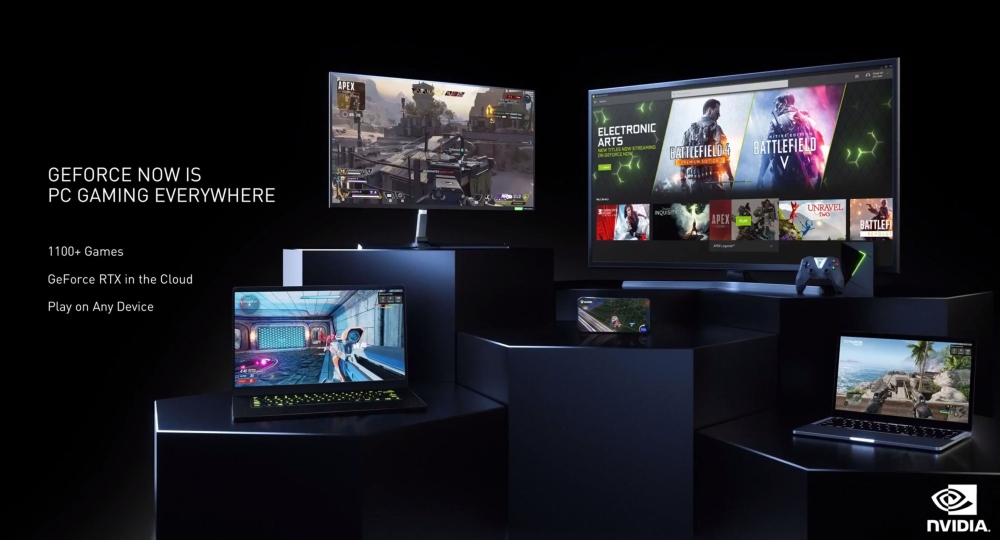 While we expected a lot more information on its newest flagship Geforce RTX 3090 Ti graphics card, Nvidia's focus was on the Geforce RTX 3050 graphics card, as this one fits just below the RTX 3060 in the mid-range market, packing 2,560 CUDA cores and 8GB of GDDR6 memory on a 128-bit memory interface.

According to Nvidia's own specification page, the GPU works at 1.55GHz base and 1.78GHz Boost clocks, and the TDP is set at 130W.

The Geforce RTX 3050 is going to be available as of January 27th, starting at $249, so hopefully, we'll see some decent supply at reasonable pricing when it becomes available later this month. 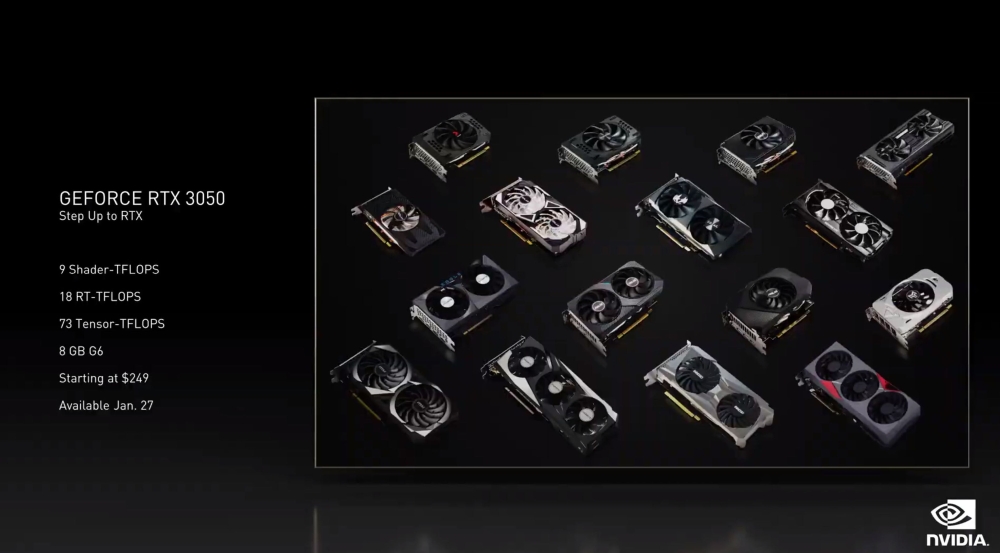 While we expected a big Geforce RTX 3090 Ti, the card was just briefly previewed by Fisher, showing it off, and giving us some details about the specifications.

According to Jeff Fisher, the new Nvidia flagship BFGPU, is a 40+ TFLOPs card, with some impressive performance across the board and comes with 24GB of 21Gbps GDDR6X memory on a 384-bit memory interface, pushing the memory bandwidth to over 1000GB/s. 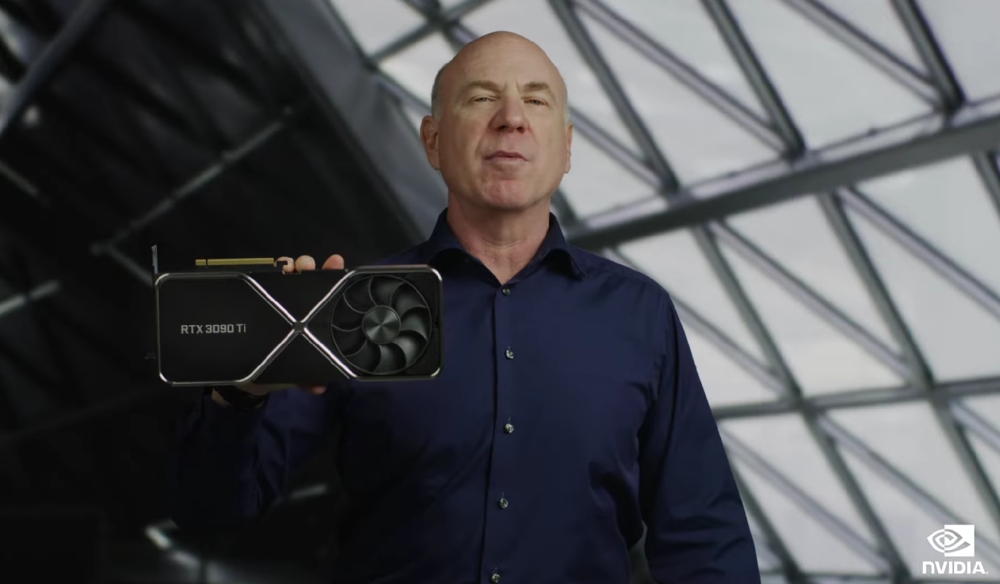 Unfortunately, Nvidia kept it brief with the RTX 3090 Ti, with more information coming later this month so it will be interesting to see how high the price will be and when can we actually expect it on retail/e-tail shelves.

A big part of Nvidia's CES 2022 address was about laptops, showing off the 4th gen Max-Q technologies, with CPU optimizer, Rapid Core Scaling, and Battery Boost 2.0.

Working with CPU vendors, allowed Nvidia to use the GPU to optimize power/thermals of CPUs and give more power to the GPU as well as allow some GPU cores to run at higher frequencies by disabling other cores, something that should both give more performance while maintaining high power efficiency and providing more battery life. 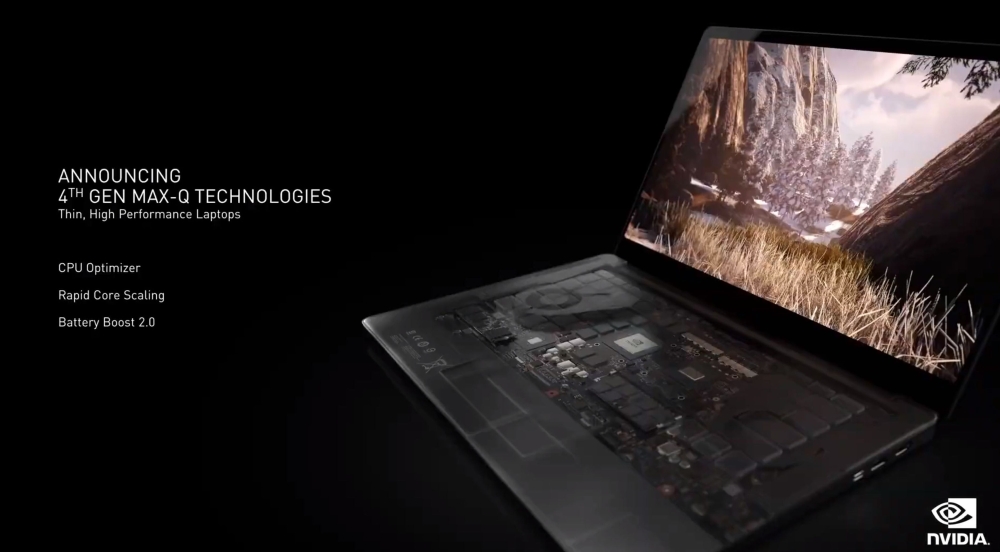 When it comes to laptop GPUs, Nvidia has announced two new GPUs for laptops, the RTX 3080 Ti and the RTX 3070 Ti, both coming to laptops in February.

The RTX 3080 Ti for Laptops is said to be faster than desktop Titan RTX graphics card, providing 120+ FPS gaming at ultra settings and 1440p resolutions. It comes with 16GB of GDDR6 memory. These laptops will start at $2,499. 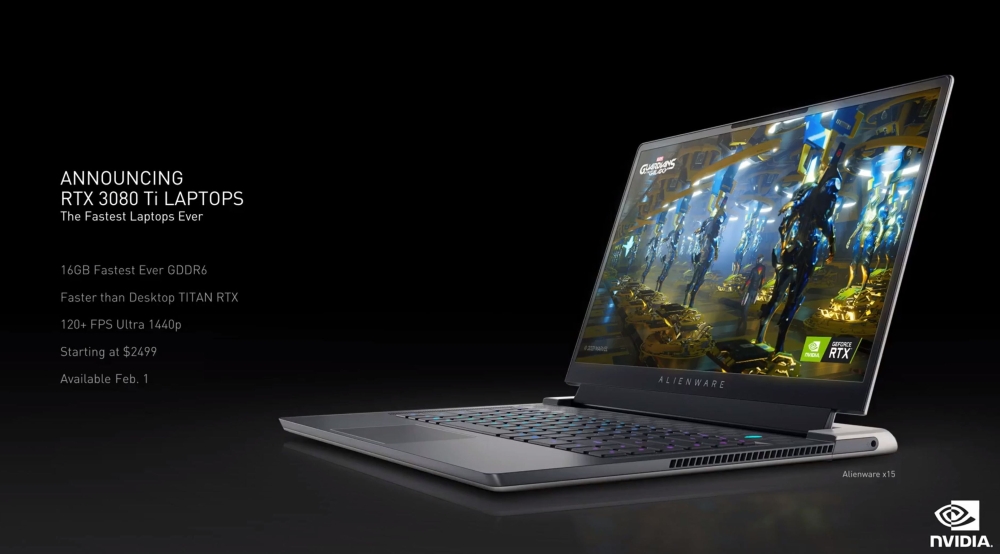 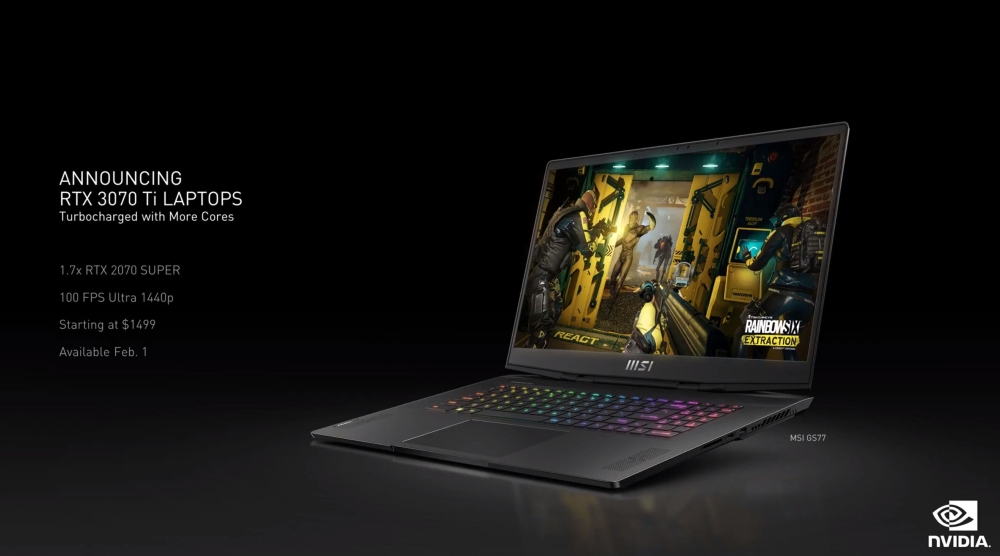 Nvidia also talked about the automotive market, and how much power is needed to run data, computing, and simulation, something that its own DGX Data Center is built upon.

The new Nvidia Drive Hyperion 8 Platform is said to be adopted by 100+ automakers, although we doubt that there are really that many automakers but the industry is pretty big so Nvidia might be counting other automotive partners as well.

The Drive Hyperion 8 platform uses two Nvidia Drive Orin SoCs and powers 9 radar, 12 ultrasonic, one front radar, and 12+ cameras, which is an impressive amount of sensors.

It is based on a standardized form factor, and the production is expected in 2022. 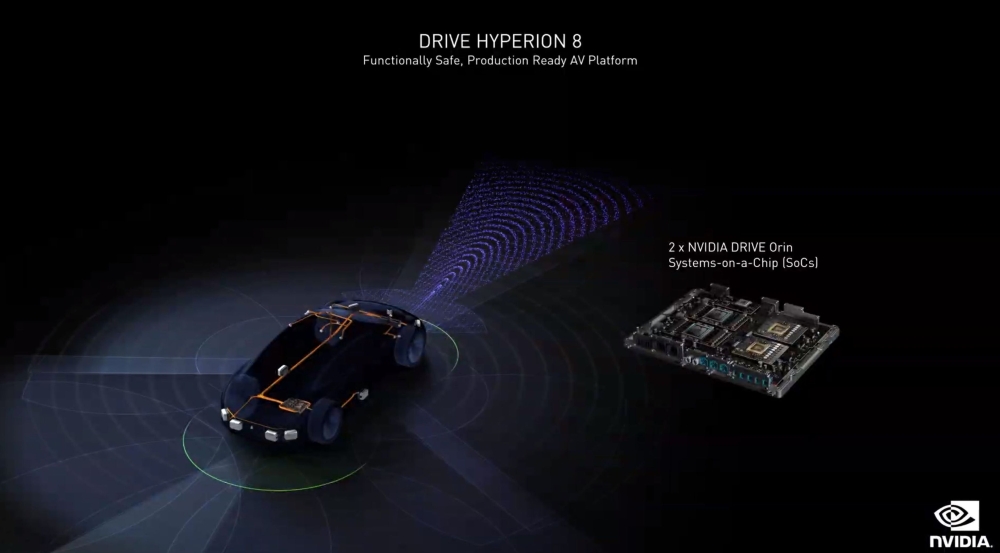 Nvidia was also showing off self-driving trucks built on Orin SoC with UPS, Penske, Navistar already using it, and this is a big part of Nvidia's market segment focus.

Nvidia had a nice product address although we would have loved to see more details and specifications, we suspect that these are coming when the actual CES 2022 closes its doors. It will be interesting to see how well will the new Geforce RTX 3050 do in its market segment and when will the RTX 3090 Ti actually come to the market.

Last modified on 05 January 2022
Rate this item
(0 votes)
Tagged under
More in this category: « AMD officially announces Radeon RX 6500 XT graphics card AMD Radeon RX 6500 XT could cost as high as €300 in Europe »
back to top