Last night Apple revealed the company has sold a staggering number of 365 million iOS devices since March 30th. It was also said that 80 percent of their customers are running iOS 5 while the remaining 20 is stuck with iOS 4 and older.

Apple talked that it served 1.5 trillion push messages, some 7 billion per day which is quite a big number. More importantly, he talked about 140 million iMessage users that have sent 150 billion messages at a rate of 1 billion per day. This should spell huge losses for telecoms but we will look into this some other time.

Apple’s iOS5 is responsible for 10 billion tweets and some 47 percent of photos come from it as well. According to Apple, the number of people using twitter on iOS increased three-fold since it was introduced for iOS5.

Game center got some 130 million accounts that are generating 5 billion scores per week and 67 or top 100 games integrate with it. If you have a team of employees who have iPhones and iPads, this is what a good portion of 130 million of them are doing when you’re wondering what they’re doing in their work hours. Shut up and throw that bird already.

You can imagine Android users aren’t happy as only 7 percent of them have the top Android 4.0, whereas 93 percent is still stuck with the old Android 2.3 or worse. The big numbers were thrown out Steve Jobs-style and traditionally made Apple look better than the competition. We have to admit that for the good parts of it they did a good job in last two years with iPhone 4 and 4S, but they do need a bigger screen. 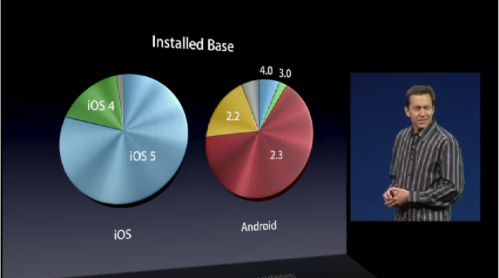 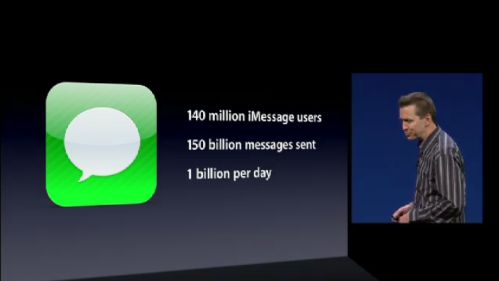 Rate this item
(0 votes)
Tagged under
More in this category: « Designer comes up with gorgeous iPhone 5 renderings Apple announces iOS6 »
back to top